Hurt Bot is an antagonist from the Cartoon Network original series Teen Titans Go!. He is a torture robot who was invented by Brother Blood to replace Pain Bot, after the latter betrayed him. It first appeared in the episode "The Best Robin".

Brother Blood kidnapped the Teen Titans and tied them up in his warehouse. He then summoned Hurt Bot on them to attack them.

Upon his introduction, Brother Blood explained to the Teen Titans that Hurt Bot was supposed to be a replacement for Pain Bot, done in lights of the events of where Pain Bot abandoned him for Cyborg and turned good.

Hurt Bot got ready to destroy the Teen Titans with a giant drill and a bunch of flamethrowers when the other Robins came in to save them, only for Hurt Bot to take out a giant anvil and smash all of them.

All of the Robins were tied up as well, awaiting the same drills and flamethrowers as the Teen Titans. When all hope seemed lost, Super Robin came in and saved them, by beating up Brother Blood and completely wrecking Hurt Bot.

Hurt Bot looks mainly identical to Pain Bot in appearance, save for a handful of noticeable differences, most prominently, the fact that it has "Hurt Bot" plastered on its body and an energy-efficient light bulb. Hurt Bot also has a rounder bottom and conveyor belts with two wheels instead of three. 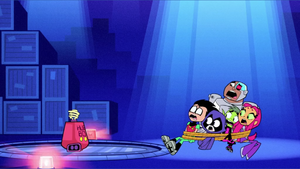 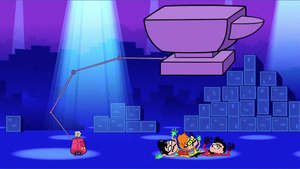 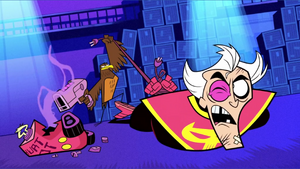