Get his revenge on Bruce Wayne (failed).

Kill specific people to graft their faces to construct one identical to Bruce Wayne's face (succeeded).

He is voiced by Kevin Conroy, who voices Bruce Wayne/Batman in the same series as well.

Thomas Elliot, was born with the rich Elliot family and was a childhood friend to Bruce Wayne. He also looked up to Bruce's father and gifted surgeon, Thomas Wayne, who he was likely named after.

However, Thomas was a born sociopath who was willing to do whatever it took to inherit the family fortune as soon as possible. To this end, he intentionally caused a car accident with his parents inside in the effort to kill them. But Thomas Wayne was able to perform a quick surgery, and while he was unable to save Elliot's father, his mother managed to survive, thus foiling his scheme. This made Elliot despise the Wayne family completely for denying him what he thought was rightfully his, including Bruce. Elliot's hatred grew even further when Bruce's parents were murdered, allowing him to inherit his family's wealth like he wanted to. Consumed by his greed, jealousy and revenge, Elliot swore to take everything that belongs to Bruce and destroy his life.

Thomas Elliot began studying surgery, and by the time he was an adult, he was one of the finest surgeons in the world. At some point, he took a job at Arkham Asylum, and was on the roster for the night shift in the medical bay. Some time before entering Arkham Cty, he began murdering people to steal their faces, so he could construct a perfect duplicate of Bruce Wayne's. These three murders earned him the nickname "Identity Thief" by the media. Sometime before the events of Arkham City, he was hired by Joker to perform the surgery that separated both Mister Hammer and Sickle in exchange for finances which funded his later surgeries.

In the Gotham Cathedral which is the location of the medical team in Arkham City, Batman sees a man with a bandaged face laying on a bed with a box in his hands. When Batman asks a nearby doctor about the man, the doctor claims that it is no inmate but a doctor as well. He claims that the place must have turned the man mad and that they realized too late. He claims that the man stole painkillers and then cut off his own face. He says as well that no one knows what's inside the box he is holding, as no one could pry it lose. When the player waits long enough, he can hear the bandage faced man, who is in truth Thomas Elliot, mutter "Wayne". When Batman returns to the cathedral again, Elliot is gone.

During the game, Batman can find three victims of Elliot who have been dumped in the city. Each time he talks to witnesses they claim that the murderer was Bruce Wayne, which Batman of course does not believe. When talking to the last witness, believing that he was the murderer, the inmate instead tells him that Bruce Wayne told him to dump the body and tells Batman where to find him. Batman locates Hush's hideout and searches for evidence. While he listens to an audiotape in which Elliot reveals what he has done, the doctor himself arrives and traps Batman. Hush then removes the bandages around his head and reveals his new face; planning to seek vengeance against Bruce by committing crimes with this new disguise. Claiming that Batman has enough to do at Arkham City, Hush tells him that he will leave Batman alone for this time, but claims that he will not be so generous if their paths cross again. Hush then leaves the building and flees from Arkham City.

Remaining behind during Scarecrow's attack, Hush infiltrates Wayne Tower, gaining access to Lucius Fox's office on the top floor. After failing to gain access to a computer due to security protocols he didn't expect, Elliott takes Fox hostage and uses his retina to access the Wayne Enterprises mainframe. He then proceeds to transfer Wayne Enterprises funds to his own account.

Before he can do more, Batman enters the room. With Fox as his hostage, Elliott demands that Batman finds Bruce Wayne and brings him before him, planning to kill Wayne. After a brief discussion about Hush's motives, Batman removes his mask and reveals his identity to Hush. Shocked, Hush gets edgy and attempts to shoot Batman, but Batman disarms him in the split second before Elliot can do so. Fox then assaults Elliot with a vase. A distraught Elliot clutches his now scarred face before Batman lifts him in the air and smashes him through him through Fox's desk, thereby knocking Elliot out. Knowing he cannot deliver Hush to the G.C.P.D. without putting himself under investigation, Batman instructs Fox to lock the unconscious Elliott in the vault under the building. 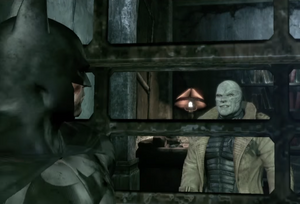 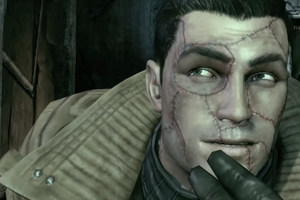 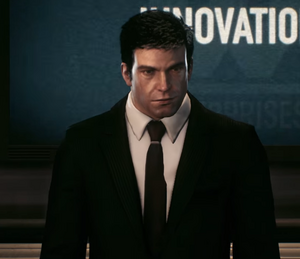 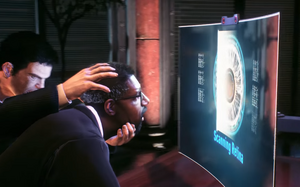 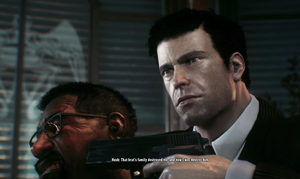 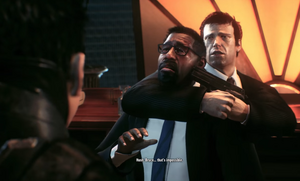 Batman revealing his identity to Elliot. 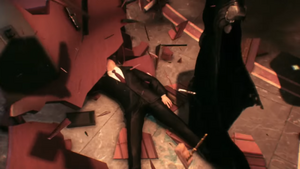 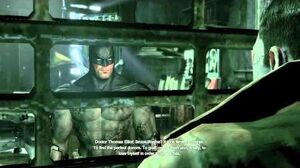 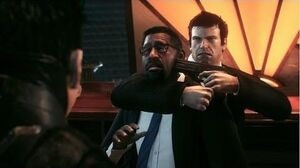