Relaxing on his recreational contraption
Researching

Hush is a cyber-terrorist, human trafficker, and transhumanist who serves as a supporting antagonist in HITMAN III, appearing as one of the two targets (alongside Imogen Royce) of its fourth mission "End of an Era".

He is voiced by Nicholas Goh.

Hush was a cyber-terrorist in Khandanyang who worked for Jin Po (Khandanyang's dictator) in the Ministry of state security. His skills were used to arrest and execute critics of Po and his regime and scare the public into obedience. Due to Po's erratic nature and extreme paranoia, Hush fled during the Great Leader's purge on all of the people he thought posed a threat to him. He recruited and manipulated a group of hacktivists who helped him build an impenetrable code that he could use to store or expose information, though his core code was made out of several different ones as each of his assistants were given different lines to work with. In reality, his code was actually being used in the dark web, prominently by those who used humans as commodities, for organ harvesting or sex trafficking.

Olivia Hall came across the truth and in her effort to expose the truth, narrowly avoided an assassination attempt. While she teamed up with Lucas Grey and eventually 47, Hush worked with the ICA and Imogen Royce. His job was creating software that could house the ICA's most classified information, a job he achieved with acclaim, frequently competing with Royce to see who could achieve the most impressive technological innovations.

While he built networks for the agency, he used his wealth and resources to experiment on people, primarily the homeless, turning them into sentient puppets by using implants to control their motor functions.

Hush resides in a derelict apartment block experimenting on the city's homeless population. He offers them large sums of money in order for them to participate in his experiments. These involve wiping their memories and personality, turning them into either lifeless husks or paranoid lunatics.

Before he is assassinated by 47, he is working with several of his subjects in an attempt to control their impulse functions and move their limbs manually. His desire to find a specimen capable of resisting his commands has led to him having painful migraines, forcing him to frequently take breaks in a recreational room tailor-made to soothe his nerves. His two assistants are at odds over whether he should be exerting himself to the level he is. If 47 replaces the hesitant subject, he will resist Hush's inputs, painfully killing him during a demented monologue where he spouts his God complex.

Hush was an exceptionally cruel and remorseless human being. He saw people as nothing more than tools and held a special hatred towards the homeless, seeing them as wastes whose only purpose in life was to be the plaything of those more powerful than them. He held little respect for those who didn't enable his extreme experiments and only listened to them for pragmatic reasons. He notably referred to the homeless as subjects or things rather than as people.

He was also profoundly narcissistic, believing himself to be a God who could control people's minds. He delighted in breaking people's minds and was constantly searching for someone to withstand his torture for as long as possible. His fanaticism to his research upset many of his employees, most of whom turned a blind eye, while the rest of them admired his devotion and intelligence. 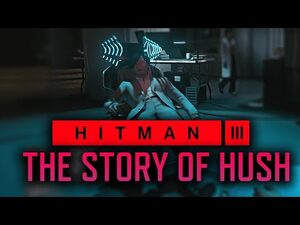