Kill his brother Alex in order to take over his role as leader (succeeded).

Rape Emilie.
Kill Marion Snow.
Escape from the MS One (all failed).

Hydell is the main antagonist in the 2012 science fiction film Lockout. He's a rapist and a serial killer imprisoned in the space penitentiary MS One. He seems to be one of the cruelest and deranged prisoners; his actions even disgust his brother Alex, the leader of the prisoners.

He was portrayed by Joseph Gilgun.

Imprisoned in MS One for having committed dozens of rapes and murders, Hydell is the first prisoner interviewed by the president's daughter Emilie Warnock. However, during their meeting, he manages to escape after stealing a gun to one of his bodyguards and releases all of the prisoners, including his brother Alex. He tries to rape Emilie but his brother prevents him since she's a precious hostage. After the prisoners took control of the prison, Hydell sadistically kills many hostages, even when his brother forbade him to do so.

Later, after Emilie was rescued by a man named Snow, Hydell contacts her and threatens to kill all the hostages unless she reveals her location, but after she does, however, he kills them anyway. The girl is finally recaptured and he tries to rape her once more but he's again prevented by Alex. Disappointed, he kills his brother and attacks Emilie, but Snow arrives and knocks him out. He then pursues them along with others prisoners but they manage to escape from the prison shortly before the place was destroyed. Hydell was killed by the explosion among with the other prisoners. 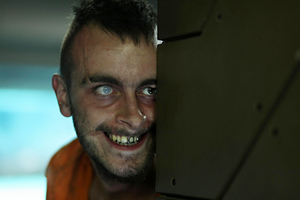