Villains Wiki
Register
Don't have an account?
Sign In
Advertisement
in: Female, Magic, My Little Pony Villains,
and 27 more

Bullying the residents of Ponyville.

Hydia is the main antagonist of the 1986 American-Korean-Italian animated fantasy film My Little Pony: The Movie, and one of the two main antagonists (along with Queen Bumble) in the 10-part episode "The End of Flutter Valley" in My Little Pony 'n Friends. She is an evil old witch from a long line of witches who use their magic to make others miserable. She is the mother of both Reeka & Draggle and the archenemy of all the residents of Pony Land. Appearing in both movie and a 10-part episode (where other episodes are four parts long at most), she is the longest running villain in the series.

In the film, she was voiced by the late Cloris Leachman, who also played Queen Gnorga in Don Bluth's A Troll in Central Park, Ida Kenzel in Malcolm in the Middle, and Dotty in My Name is Earl. In the TV series, she was voiced by Tress MacNeille, who also voices Millionara Vanderbucks in Ducktales, The Trina Twins in Mighty Ducks, Valkyran Guard in Buzz Lightyear of Star Command, Agnes Skinner, Dolph Starbeam, Lindsey Naegle, Dame Judith Underdunk, Francesca Terwilliger, Spud, & Adil Hoxha in The Simpsons, Dil in The Land Before Time IV: Journey Through The Mists, Sarah Ravencroft in Scooby Doo and the Witch's Ghost, Carol Miller & Ndnd in Futurama, Si and Am in Lady and the Tramp II: Scamp's Adventure, Gilda & Dr. Steinheimer in Recess: School's Out!, Anastasia Tremaine in Cindirela III: A Twist in Time, & Gretel in Disenchantment.

Hydia was especially abusive towards her two daughters Reeka and Draggle, to the point of punishing them for calling her "mommy" - a short-tempered crone and all-around nasty woman that she lived within a volcano and cast many evil spells in her eternal crusade against all things "nice".

The End of Flutter Valley shows how evil Hydia can truly be as she allied with another villain to steal the Sunstone, which would literally cause Flutter Valley to die - allowing Hydia to take over the barren wasteland (which she preferred, detesting anything that resembled beauty or kindness).

In the past, Hydia unleashed a gargantuan slime monster called the Smooze, who destroyed the Grundles' kingdom.

Hydia decided to destroy Ponyland the same way. She had Reeka and Draggle bring her the ingredients to create another Smooze. They brought her all ingredients except the Flume, which neither wanted to get due to it being inside a vicious plant monster. Hydia threw the ingredients into the lava of the Volcano of Gloom to create the Smooze, who attacked Ponyland. Megan was able to defeat him with the Rainbow of Light, though he took the Rainbow in the process.

Reeka and Draggle were forced to admit to Hydia that they didn't get the Flume. Furious, Hydia sent them to get it. Once they obtained it (nearly dying in the process), Hydia fed it to the Smooze, returning him to power and making him stronger. When Megan and the ponies heard from the Moochick that the Flutter Ponies could stop the Smooze, she sent the giant spider Ahgg to stop them from reaching Flutter Valley, but they got by Ahgg by tickling him.

Hydia, Reeka, and Draggle rode a boat on the Smooze as he made his way to destroy Paradise Estate, but the Flutter Ponies arrived and threw the Smooze into the Volcano of Gloom, killing him and releasing the Rainbow of Light, which dropped the three witches in the volcano (though they survived, as they landed in the slime that was once the Smooze). It's revealed that Hydia knew the whole time that the Flutterponies could destroy the Smooze, but she lied as a excuse to be confident that she would win.

The End of Flutter Valley

In the 10-part episode, Hydia sought revenge for her defeat, so she sent Reeka and Draggle to ruin the Flutter Ponies' celebration. This failed due to Draggle reading the wrong spell, and the Flutter Pony Morning Glory decided not to go after the witches, mistakenly thinking they did not mean any harm.

The ponies and Spike went to Flutter Valley for help in defeating the Stonebacks, where Hydia attacked them with Reeka and Draggle. Gusty blew Hydia backwards before she had Ahgg trap them in a net of webs, saying that she would do something horrible to them after making them watch Flutter Valley die. Hydia told Draggle to cast a spell to turn the ponies purple, but it backfired and turned the witches purple instead.

After the witches reversed the spell, Draggle was tricked into releasing the ponies, but Hydia recaptured them with a magic wall, and Ahgg imprisoned them again in his web net. When Megan and the Flutter Ponies recovered the Sun Stone and made their way back to Flutter Valley, Hydia gave Ahgg a potion making him immune to tickling and sent him to stop them, but they dug a tunnel under him and reached Flutter Valley. The witches were forced to retreat as the Sun Stone was returned before sunset, saving Flutter Valley.

After Queen Bumble's redemption, Hydia, Reeka, and Draggle conjured a cloud to block the sun in a final attempt to destroy Flutter Valley, but the Flutter Ponies blew the cloud away, and, having learned from their past mistake, blew the witches away to parts unknown with Utter Flutter. They have not been seen since, and to prevent them from trying anything else ever again (having been spared twice before), they were presumably either imprisoned somehow or blown over a cliff (or possibly into the lava of their volcano). 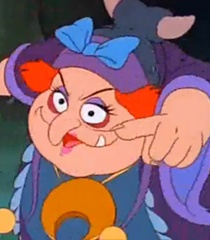 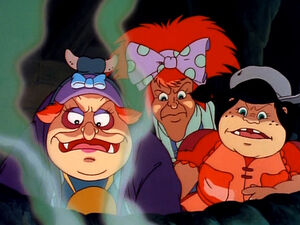 Hydia with her 2 daughters Reeka and Draggle. 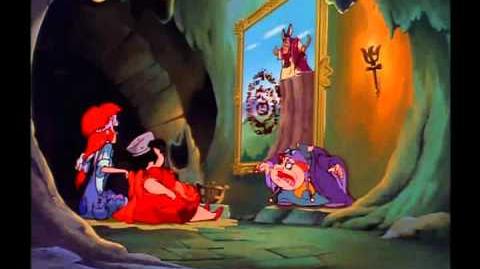