The Seventh Colossus, nicknamed Hydrus, is a major antagonist from the video game Shadow of the Colossus. It is the seventh boss encountered in the game and a vessel for the essence of Dormin.

Hydrus and the other sixteen Colossi were created by Lord Emon to contain the fragmented essence of the defeated evil Dormin. He set them all to wander the Forbidden Lands, destroying anyone that comes their way, so that Dormin could never be resurrected.

Hydrus is found in a large lake in the northwest. It will be seen swimming around the ruins and diving into the depths. Upon Wander entering the lake, Hyrdus will swim around below the surface until breaching, sticking its electrical spines over the surface in an attempt to shock and kill Wander. Wander must avoid these and grab onto the colossus' tail when it finishes its breach. Hydrus will then try rapidly diving and surfacing in an attempt to throw Wander off and/or shock him with its spikes. Wander must wait until it is safe, then rush forward and stab weak points underneath each spike to disable their power, making the area safe. After taking out some of the spikes, Hydrus will dive deeper into the lake and refuse to resurface, forcing Wander to let go or drown. It will lurk around in the water before making another attempt on Wander's life, breaching again. Wander must repeat the process, disabling the rest of the spikes before reaching Hydrus' head. There, he will be able to stab Hydrus' major sigil, though Hydrus will attempt to throw him off. by continuously diving in the water. After the sigil is stabbed, Hydrus will die, releasing the fragmented essence of Dormin contained within its body before sinking to the bottom of the lake.

Hydrus' corpse can be seen as the credits roll. 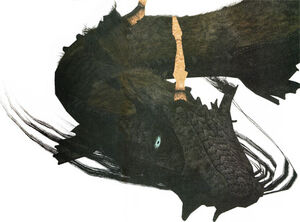 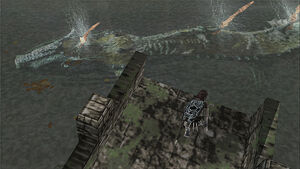 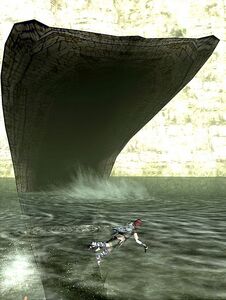 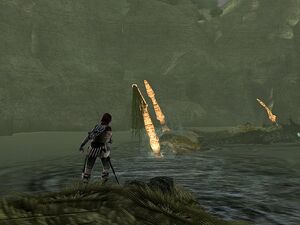 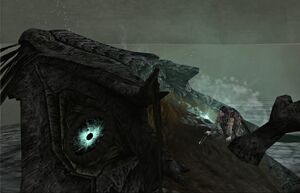 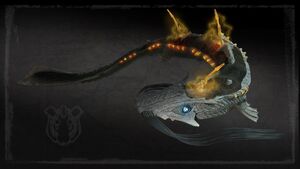 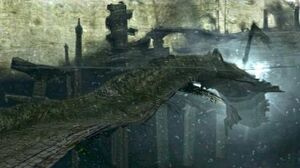 Retrieved from "https://villains.fandom.com/wiki/Hydrus?oldid=3268909"
Community content is available under CC-BY-SA unless otherwise noted.