Hyena-Swine is one of the antagonists of the 1996 sci-fi/horror film The Island Of Dr. Moreau.

He was portrayed by the late Daniel Rigney.

Hyena-Swine first appears at Lo-Mai's trial and death and finds the implant, in Lo-Mai's burned body and then takes out his own. Later he reveals to Dr. Montgomery that he's taken out his implant, which keeps them in submission. He then gathers a group of animal mutants and then they viciously attack and kill Dr. Moreau. Then Azazello asks if he can join them and they say he can if he takes them to more firearms and weapons. Hyena-Swine and his followers unleash all kinds of anarchy on the island including destroying the boat. 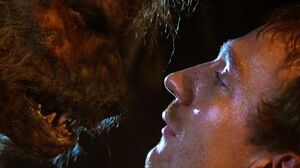 The Island of Dr. Moreau Tell them that i am god
Add a photo to this gallery
Retrieved from "https://villains.fandom.com/wiki/Hyena-Swine?oldid=3703119"
Community content is available under CC-BY-SA unless otherwise noted.