Creed Quinn was chosen along with Logan Wayne to become a living weapon in the Weapon X Project. Both survived, but while Logan diverted from their plans for him, Creed went to accept it, and became a remorseless and psychopathic killer. He soon became obsessed with killing Dark Claw.

Hyena possesses many elements of both halves of his amalgamation characters, including a white painted face with a mane of wild green hair, long claws, and an insane smile. He has the savageness of Sabretooth along with the twisted wit of Joker. He leads a gang called the Pack, and wields explosives which he calls "frolic frags". 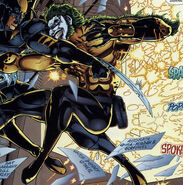 Retrieved from "https://villains.fandom.com/wiki/Hyena_(Amalgam)?oldid=3719082"
Community content is available under CC-BY-SA unless otherwise noted.