Has the ability to transform into a were-hyena and can control it at will.

Save Firestorm from the second Hyena (succeeded).
Assist the Secret Society of Super Villains in creating a New Earth (failed).
Escape the planet Salvation (failed).

Hyena is a supervillain in the DC Comics universe and is primarily an enemy of Firestorm but has clashed with other superheroes. There are six individuals who have used the Hyena persona. They are Summer Day, Jivan Shi, and four unnamed criminals.

Doctor Shi and Summer relocated at the exclusive Eastside Medical Center. He kept Summer at the hospital as a patient and the two continued to work with one another in the hopes of assuaging the symptoms of the curse.

Meanwhile, Firestorm learned that Summer had returned to Manhattan. She continued to suffer from bouts of depression and was given to memory loss and sleepwalking. When Summer turned up missing one evening, Firestorm feared that the Hyena had struck again. He encountered the Hyena at Eastside hospital, but this version of the monster was Dr. Shi. Summer eventually learned that Shi was now attacking people and voluntarily transformed back into the Hyena to face him.

Unlike on prior occasions, Summer actually sought to save him. Summer and Jivan began battling one another and their fight carried over to the top of the World Trade Center. Firestorm attempted to stop both of them, but accidentally turned his powers against Summer. Firestorm realized his error in judgment and successfully saved her from slamming into the concrete below. While Firestorm turned his attention back towards Jivan, Summer made her escape and afterwards went to Africa where a magician removed his curse.

Doctor Jivan Shi was a psychological therapist working out of a special facility in the desert of Arizona. There he met Jivan and helped her to suppress the emotional triggers that prompted the transformation into the Hyena. Summer's condition improved and the two became romantically involved. One evening in the throes of passion, Summer reverted to her Hyena state and bit Dr. Shi across the throat. She passed the curse along to him and within days he too transformed into a were-hyena.

Jivan worked under the chief resident, Dr. Barry Gleason. Gleason was an arrogant, bitter man and treated Dr. Shi as a second-class citizen. Shi suspected that Gleason resented him because he was a foreigner. He began rampaging throughout the hospital and ultimately came into conflict with the super-hero known as Firestorm.

The Hyena evaded capture and eventually raked his claws across the back of Ronnie's neck. This act transmitted the curse onto Ronnie, but with strange permutations. He kidnapped Dr. Gleason with the intent of ultimately killing him. Firestorm tracked him down and the two adversaries fought each other on the roof of the World Trade Center.

Summer Day was able to maintain her were-hyena form. She assist Firestorm engage in a massive fight with Firestorm caught in the middle. During the melee, Firestorm had to abandon his fight with Dr. Shi in order to save her. Dr. Shi took advantage of the hero's distraction and escaped. The Justice League dispatched Black Canary, Vixen and Zatanna to handle this Hyena problem.

They try to comfort Killer Frost who is depressed because Firestorm is supposedly dead and he was her one hope of returning to normal) but give up and lets her sulk. Hyena and his group are later seen in Central City, tasked with destroying what remains of the city. The Rogues clash with them, deciding that they won't help the Syndicate. Hyena battles the Trickster, who simply toys with him.Hyena manages to take a massive bite from his shoulder. He is then defeated by Trickster. Hyena is also mentioned in Forever Evil: A.R.G.U.S. when Steve Trevor's partner tells him about how their undercover agents have been revealed and are being killed.  The fact that the Trickster hasn't shown any symptoms of becoming a Were-Hyena likely means the Hyena's transformation was due to the drug. 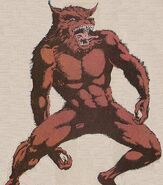 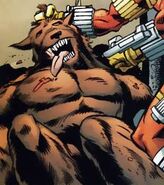 One of the main Hyenas gets killed by Deadshot 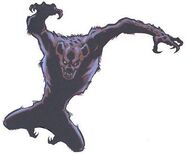 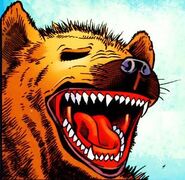 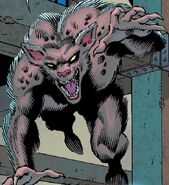 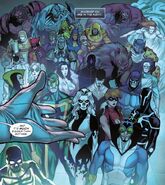