Trying to free the Hylden.

Wipe out the vampires and humans to free the Hylden.

The Hylden Lord is one of the antagonist from the Legacy of Kain series, acting as the main antagonist of both Blood Omen and Blood Omen 2.

He was voiced by the late René Auberjonois, who also played the Mr. House in Fallout: New Vegas, Patrick West in Star Trek VI: The Undiscovered Country, Tony in Police Academy 5: Assignment: Miami Beach and Nefir in Aladdin: The Series.

The Hylden Lord was one of the leaders of the Hylden, one of the three races that lived in Nosgoth, along with the Humans and the Ancients. Because the Hylden rejected the Wheel of Fate, which the Ancients adored, the Ancients started a war against the Hylden. The Hylden were defeated and trapped in the Demon Dimension. However, the Hylden placed a curse upon the Ancients, turning them into Vampires, unable to reproduce, thirsting for human blood and (worse of all) they became immortals.

Most of the vampires, unable to return to the Wheel of Fate and their god because of their immortality, went into madness and committed suicide. The vampires created the Pillars of Nosgoth in order to bind the Hylden, with a chosen guardian for each one of the pillars.

Because the vampires were unable to reproduce, the pillar would chose humans as guardians instead, and the vampires had to look upon them and turn them into vampires to serve the pillars. The humans didn't accept being turned into vampires, claiming the guardianship of the pillars for themselves. The guardians Mortanius and Moebius then started a vampire purge, creating the Sarafan Order to hunt down the vampires. Because the humans couldn't properly serve the pillars, the binding weakened, and this allowed the Hylden Lord, the leader of the Hylden, to project his soul upon the mortal world.

Under the guidance of the ghost of Ariel, kills all guardians, Kain except for Anacrothe and Mortanius himself. As he arrives at the pillars, he sees the two arguing and fighting shortly after, with Mortanius easily killing Anacrothe. Kain then proceeds to fight Mortanius, but when he is about to kill him, the Hylden Lord takes complete possession over him, mutating his body into a monstrous form. The Hylden Lord mocks Kain for being his pawn, who then fights the monster, vanquishing him for the time being.

Having come to the Blood Omen era, Raziel talked with the Hylden Lord through the possessed Mortanius before he would go to the pillars to face Kain. After he is defeated by Kain, he possesses Janos Audron, an ancient vampire who had been recently resurrected by Raziel. He praises Raziel for providing him the host he needed to put his devious plans into action. Raziel fights him and defeats him, but he couldn't bring himself to kill Janos, thus allowing the Hylden Lord his ultimate triumph. He destroys Raziel physical body and flees to continue his plans.

The Hylden Lord proceeds to open the Hylden Gate using Janos body, gathering an army to start a full invasion upon Nosgoth. He starts to gain influence over the humans by exploiting their fear over Kain and the vampires. He takes over the capital of Meridian and recreates the Sarafan Order to hunt down the vampires, placing himself as the Sarafan Lord. 200 years after Kain's decision at the pillars, the two face each other in battle outside of Meridian. He defeats Kain and claims for himself the Soul Reaver, Kain's sword.

Kain is presumed to be dead, so the Hylden Lord starts ruling Nosgoth as an oppressive dictator for another 200 years. He unearths The Device, an ancient Hylden weapon intended to kill all the vampires and even humans in Nosgoth, and then places the body of Janos Audron to feed it with his power. During all of this time, Kain was under a deep slumber until he awoke and started a quest to defeat the Sarafan Lord and reclaim the Soul Reaver. With the help of the Cabal, a resistance group, he destroys the Device and saves Janos Audron, proceeding to fight the Sarafan Lord.

Kain destroys the Hylden Gate with the help of Janos, but the Hylden Lord throws Janos through the gate, sealing him into the Demon Dimension. However, Janos' interference allows Kain to recover the Soul Reaver, using it to defeat the Hylden Lord once and for all.

The Hylden Lord is ultimately a manipulative megalomaniac that seeks nothing short of freeing his people and dominating the world for all eternity as an all-powerful god. It is shown that he is able to manipulate nearly everyone as he manipulated the events of Kain's corruption as well as Raziel in the present to freeing him so he could escape the Demon Dimension through possessing Janos. Even upon regaining his original body and nearly killing Kain with the help of some humans the Hylden Lord dominated the world and offered some of Kain's old generals a chance to join him though secretly plotted to kill them once he could find a way to free the rest of his kind.

The Hylden does mention how while they were going to commit genocide the entire conflict with the Ancients was due to the Ancients trying to force the Hylden to submit to their god or suffer, at that point the Hylden decided the best course of action was to wipe out the Ancients and humans who seemed to share a similar mindset to keep their freedom. In the present the Hylden Lord still holds a great desire to wipe out the Ancients and vampires to get revenge on them for banishing his people to the Demon Dimension, while he planned to also wipe out humanity it was seemingly less out of hatred as much as necessity to free his people by ensuring no guardians can rise to uphold the pillars. The Hylden Lord is many ways similar to Kain in he sees his race as superior and wants to see his race prosper even believing they are like gods when compared to others.

Despite being a ruthless supremist bent on genocide he does genuinely care for the Hylden with even after taking over the world he searched for a way to free them, even spending centuries to do so despite having many human followers. While he does send a small horde of the few freed Hylden after a younger Kain it was due to desperation as should Kain use the Nexus Stone it would kill all the Hylden outside of the Demon Dimension and keep the others trapped in the Demon Dimension. Ultimately he is a skilled and powerful warrior who refused to back down, even as Kain offers him a chance to retreat back to the Demon Dimension or die the Hylden Lord refuses to give up. Even when knowing he'd die due Kain successfully throwing the Nexus Stone into the Hylden Gate (which in turn meant it could no longer protect Kain) he attacked Kain without hesitation determined to settle the score. Even as he lays on the ground fatally wounded the Hylden Lord proudly states while he will die his race will one day return to take their vengeance.

Like all Hyldens, he has physical capabilities far superior to any human and is more powerful than Janos Audron. Due to the fact he was locked into the Demon Dimension it granted eternal life and regenerative capabilities, but his body was deformed in the process. As for powers, like all Hylden, is capable of possessing dead and living bodies, he is also capable of manipulating electricity, throwing lightning bolts, mastering the magic of gylphs which is "Deadly to Vampires" and he is capable of teleportation. For equipment, he has a normal sword, but after the fight with Kain, he gets the legendary Soul Reaver, an indestructible sword that devours the souls of those who hit it and is capable of projecting energy. He also had the Nexus Stone that can manipulate "Space-Time", and allows create portals to anywhere in Nosgoth, with the added bonus of protecting him from the Soul Reaver sword. 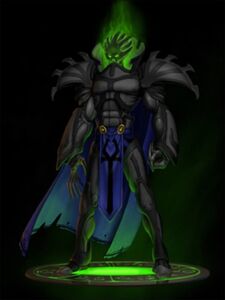 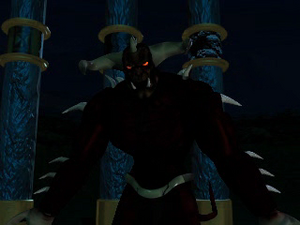 The Hylden Lord (also known as The Dark Entity), after taking possession of Mortanius.
Add a photo to this gallery 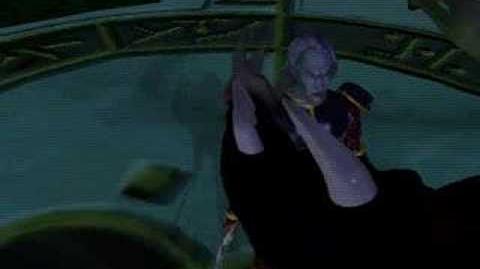 Retrieved from "https://villains.fandom.com/wiki/Hylden_Lord?oldid=4156906"
Community content is available under CC-BY-SA unless otherwise noted.