The Land Before Time III: The Time of the Great Giving

Prevent Littlefoot and his friends from growing up by planning on killing them (formerly; failed)

Arrogant Bully
Hyp is the main antagonist-turned-supporting character in The Land Before Time III: The Time of the Great Giving. He also reappears in the series finale of the Land Before Time TV series, The Great Egg Adventure where he returns as being a bully until he reformed again.

He is voiced by Whit Hertford in the third Land Before Time film and then he was voiced by Michael Kelley in the TV series of the same name. It is unknown why Hertford did not reprise his role as Hyp in the TV show.

Hyp is an adolescent hypsilophodon who lives in the Great Valley with his unnamed father. Hyp also appears to be the leader and boss of his two friends, Mutt and Nod.

It is unknown what happened to Hyp's mother since she never appeared in the Land Before Time movies or TV show episodes, so, that means she either died or got a divorce with Hyp's father.

At first, Hyp was mean, bossy, rude, arrogant, angry and cruel and he also appeared to be an abusive bully but he later reforms at the end of the third film, as well as the TV show episode, The Great Egg Adventure. Hyp is also occasionally shown to be cowardly when he gets scared of things like Sharpteeth, sinking, a wasp, flying rocks, and even when his father gets angry.

In The Time of the Great Giving, Hyp is a silver dinosaur with a white belly, square white teeth and gold eyes. In the TV show, Hyp is gray and he has dark brown-gray eyes and triangle teeth. 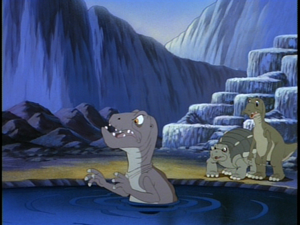 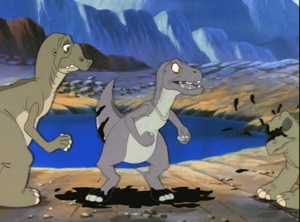 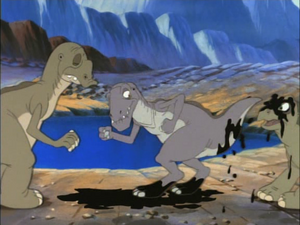 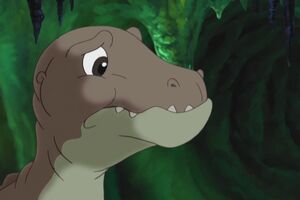 Hyp in the TV show
Add a photo to this gallery

Retrieved from "https://villains.fandom.com/wiki/Hyp?oldid=4089256"
Community content is available under CC-BY-SA unless otherwise noted.