False leader of the Squadron Supreme

Trying to defeat the Avengers.

Gloating.
Getting beaten up by Hulk and Thor.

Conquer all of Earth along with his team and rid it of crime, corruption and wars.

Hyperion is a major villain in Avengers Assemble. He first appears where he helps the Avengers into stopping some meteorites that used to be from a doomed planet with one of them being classified by J.A.R.V.I.S. as an "Earth-Killer."

He was voiced by Brian Bloom.

Then Hyperion crashes the Avengers' battle with Wrecker and defeats him. The Avengers encounter Hyperion in his citadel above the city where the Avengers claim that he is endangered series. Hyperion orders his computer Quagmire his history where he tried to stop the full corruption of his planet and failed.

Hyperion then hears of trouble on the bridge and heads there. The Avengers follow Hyperion where they find him trying to eliminate Wrecker (who Hyperion suspected of leaving town). The Avengers stop him from taking out Captain Marvel as he claims that the Avengers are like the problem on his planet.

He took out Hulk and Thor and damaged Falcon's flight pack until only Captain America, Hawkeye, and Black Widow are left. Hyperion states that the humans are flaw until he discovers that the Avengers provided a diversion so that Iron Man can get into Captain Marvel's citadel. Hyperion confronts Iron Man and prepares to engage him.

When Iron Man asked why he chose Earth, Hyperion stated that he chose Earth so that he can offer them peace and order. With help from J.A.R.V.I.S., Iron Man showed him what happened to this planet and that Hyperion destroyed the planet when they wouldn't listen to him.

Iron Man states to Hyperion that Humans aren't perfect. Hawkeye fires a distraction arrow so that Thor and Hulk can take down Hyperion. Hyperion is then shown in a special cell stating that the Earth will soon need him again.

In the episode "Bring on the Bad Guys," the final scene showed that Red Skull and his Cabal have obtained the cell holding Hyperion as Red Skull frees him. As Hyperion wants vengeance on the Avengers, Red Skull invites Hyperion into the Cabal in exchange that Hyperion can trust him. In the episode "The Ambassador," Hyperion joins the Cabal into attacking Doctor Doom at the United Nations. The speaker in Doctor Doom's armor does perform a sound attack that gives Hyperion temporary hearing problems as he is attacked by the Avengers. After Doctor Doom was taken into Avengers Tower by Captain America, Hyperion and the rest of the Cabal retreats. 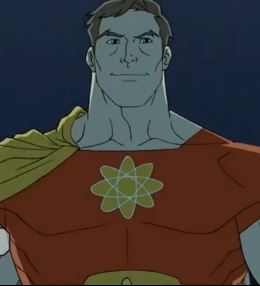 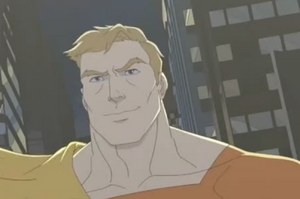 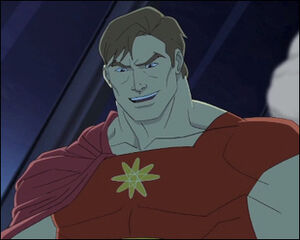 "Pathetic, to think I believed you worthy to be on my team." 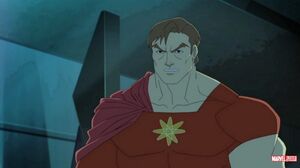 "I chose Earth because it was weak, and in need of saving!" 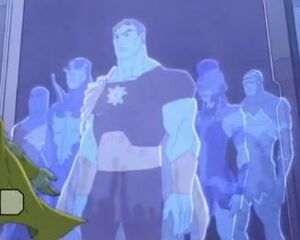 Hyperion along with his Squadron Supreme 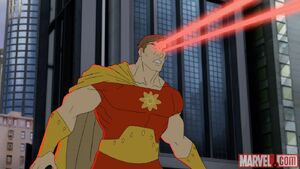 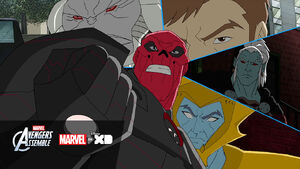 Hyperion alongside the Cabal