Hypnos (ヒュプノス in Japanese) is a temporarily evil organization in Digimon Tamers and the first main villains of the show. The headquarters are located in Shinjuku, Tokyo, where many sightings of Digimon have been confirmed.

The original purpose of the organization was to overlook any dangerous digital activity, but after it was considered a violation of privacy, the organization was kept a secret. However, after Digimon (then named "Wild Ones") started to emerge in the Real World, the organization quickly changed it's objective to prevent Digimon from emerging, and if it does emerge, to capture and study it. Behind the scenes, the corporation's leader Mitsuo Yamaki didn't want to just capture the Digimon, but to destroy them before they could get really dangerous.

Role in the anime

The organization is initially dangerous in the first half of the season, tracking down Digimon who tried to enter the Real World and halting their actions, almost like a sleep mode (hence the name). However, after Yamaki and some henchmen captured a DarkLizardmon to study it, something went wrong and it got free, not only becoming a full threat but proving the organization's system isn't really perfect. Yamaki, fueled with anger, tries a new, dangerous program called the "Juggernaut" ("Shaggai" in the Japanese version) that opens a rift between both worlds and begins sucking all Digimon in the area. But one of the Digimon Devas, Mihiramon, uses the rift to enter the Real World and openly mocks Yamaki's attempt to capture him, causing him to leave in frustration.

During the Devas' attacks, Yamaki summoned the Digimon program's creators, the "Monster Makers" (or "Wild Bunch"), to help him in destroying the Devas and the Tamers' partners, but soon his mind changed and the programs were left aside, so the corporation could work on a way of transportation after Calumon is kidnapped by Makuramon. They manage to create an "Ark" which also serves as a spaceship to travel back and forth between both worlds, which is used by the Tamers to travel into the Digital World and save Calumon.

After the malevolent program called the D-Reaper invades the Real World, Hypnos' personnel begins to help the Tamers to fight it. Also, it was thanks to the Juggernaut Program that the Tamers managed to help the Digimon Sovereigns in reverting the D-Reaper to it's original, harmless form.

The corporation has many digital weapons to deal with Digimon, but two of these were revealed in the story:

Almost an energy blast, it automatically locks on and strikes a Digimon with the intent of deleting it, but it is a weaker program and is easily overpowered later in the season. The program is later downloaded in Gallantmon's vehicle, Grani.

The most powerful weapon of Hypnos, a massive digital vortex that opens a rift between both worlds and sucks nearby Digimon, sending them back, but it also causes the entrance of the Deva Mihiramon. The program is later downloaded into MegaGargomon, who uses it to reverse the D-Reaper's vortex and causing a reverse time flow, which sucks the program back into the Digital World and reverses it into a harmless form. 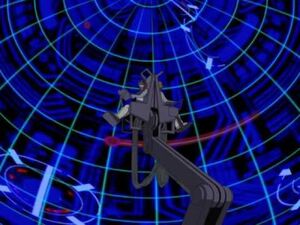 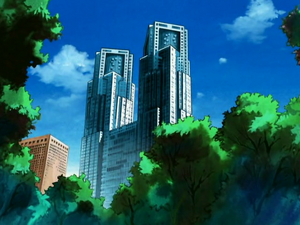