Control People Into Serving Him

Hypnotoad is an evil (or at least manipulative) animal and a recurring character in the animated TV series Futurama.

It is a large toad-like creature that has large oscillating multicolored eyes and emits a droning hum. His eyes glow all the time. The toad apparently uses these as a power of hypnotism on surrounding people and animals. Hypnotoad hypnotizes sheep into a pen at a pet contest and then hypnotizes the judges and the audience into awarding it first prize (see clip below). He is also known to hypnotize crew workers into committing suicide when his show is interrupted.

It is a rather large toad with eyes that put anything that looks into them into a hypnotic trance, forcing them to do whatever the Hypnotoad wants. Its eyes have black pupils with first red, then yellow rings around it.

The origins of Hypnotoad are unknown, but it is speculated that it is an alien, mutant or a product of genetic engineering. It would also appear that it is the only one of its kind on Earth. However, it is possible that a creature similar in design to the Hypnotoad found on Kif's homeworld is part of its ancestry. Hypnotoad also has its own television show called Everybody Loves Hypnotoad. It consists of a stationary camera filming the Hypnotoad and its noise continuously. Despite the odd premise behind the show, it ran successfully for over three seasons, possibly because it hypnotises the audience. 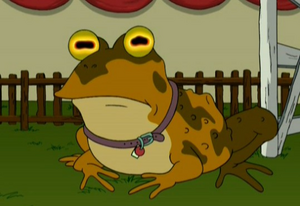