Mercenary in the OASIS

Terminate the High Five so IOI can win ownership of the OASIS (failed).

I-R0k is a minor antagonist from the 2011 science fiction novel Ready Player One by Ernest Cline, and one of the two secondary antagonists of its 2018 film adaptation of the same name (along with F’Nale Zandor).

He was portrayed by T.J. Miller.

I-R0k's avatar is a very bulky and muscular individual. His chest is a large skull with sharp teeth, with two eye holes and a nose-hole going straight through his chest. He has shiny metal armor for clothing, and his skin is a bright blue hue. After his avatar's arm is sliced off, he replaces it with a tentacle, which gets ripped off accidentally by himself, later.

I-R0k is a bounty hunter in OASIS who has no problems about who runs OASIS and is willing to do anything as long as he gets a profit from it. Despite his villainous appearance, he has a somewhat whimsical and humorous personality at times, saying what is on his mind and speaking in a very casual tone with Nolan Sorrento. Even though this more humorous side is off-putting, I-R0k is, in fact, a very clever and analytical individual who was able to set a trap for Wade and find out his true world identity by cross-referencing his name with public records and OASIS purchase history.

Eventually, Art3mis asks Parzival to go to a club in OASIS, where they danced and had fun. While l-R0k was in the club as well, spectating and planning to terminate them, soldiers from Oasis interfered and attempted to kill Parzival. I-R0k is later seen speaking with Nolan, telling him that his plan wasn't well planned since all it would do was slow him down, whereas his plan was actually successful. He then tells him what he found out of Parzival and reveals his real-world identity: Wade Watts.

I-R0k is seen again at the headquarters of OASIS, walking with Nolan and conversing about the upcoming battle. Nolan then asks for the magical orb that would create an impenetrable barrier, and I-R0k performs a magic incantation which activates the orb's powers. I-R0k was absent for most of the battle and stayed within the confines of the castle, only fighting when Wade and his group had breached the castle. I-R0k then proceeds to shoot at the group from above with a sniper rifle and is nearly successful, until he gets his hand with the gun cut off and runs away to heal.

I-R0k appears alongside Nolan with Wade and his friend and watches as Nolan attempts to make a final deal with Wade. When Wade refuses, Nolan proceeds to activate the bomb. I-R0k interjects, believing that it had only been a bluff, reminding Nolan that everyone dies when the bomb is activated and said he has over 10 years of items on his accounts. Nolan then engages in combat with Wade and his friend, while I-R0k attempts to flee from the world in a desperate attempt to save his items and coins. When Nolan activates the bomb, I-R0k is just a few steps from the portal to escape the explosion, but is too late and dies in the blast, losing all his coins and items. After the explosion, I-R0k is not seen again for the remainder of the film. It's unknown what happened with I-R0k following the arrests of Sorrento and F’Nale Zandor, but it's presumed that he keeps playing on the OASIS to recover all those items he lost, yet must have been forced to adapt to the new rules established by Wade, who inherited the OASIS, unless he also got arrested in the real world for his actions for helping Sorrento in his plot. 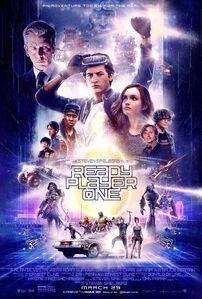 I-R0k on the film's poster.

"IOI. They're always getting in the way."

"No man is a failure, who has friends."

I-R0k's defeat, his avatar having been killed off by the Cataclyst.