Lock all of the goodie-goodie children in his labyrinth.

Ignatius Mortimer Meen, or I.M. Meen for short, is the titular main antagonist of the 1995 educational computer game I.M. Meen for MS-DOS, and a supporting antagonist in its sequel, Chill Manor.

He was voiced by Peter Berkrot.

I.M. Meen is a wizard with an unrivaled hatred of goodie-goodie children, who spend all their time reading, and traps them in his Magic Labyrinth with an enchanted book. He sings a song about this during the game's intro, and during gameplay he occasionally appears to taunt the player. He is defeated at the end of the game by "Writewell's Book of Better Grammar", which the player finds with the help of Gnorris, a gnome who works for Meen but decided to help the children escape.

The player travels across the labyrinth, defeating the monsters and rescuing the children, causing the labyrinth's condition to rapidly deteriorate. They eventually confront I.M. Meen himself and defeat him using the Writewell's Book of Better Grammar, which he had stolen and placed in the labyrinth. He swears that he will have his revenge and disappears.

I.M. Meen is an arrogant, insufferable braggart who believes he is the "most powerful magician in the world", even though he gets defeated by kids armed with only good grammar. Meen's arrogance is further illustrated in his terribly written self-insert stories, wherein he portrays himself as an amazing hero loved by everyone.

He is sadistic, self-absorbed, and (as his name implies) mean, he is constantly taunting the player character throughout the game and enjoys seeing them suffer. When he is victorious, he loves to rub his victory in. He is also a sore loser who breaks down in tears when the player destroys his labyrinth and swears revenge when he is defeated for good. 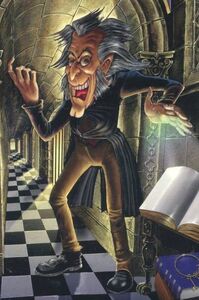 I.M. Meen as he appears in the cover. 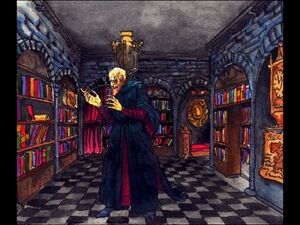 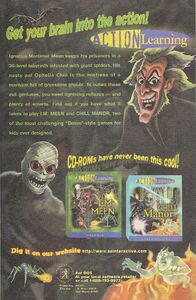 "Back into your cell, bookworm! Don't worry, I'm sure you'll escape again...IN A HUNDRED YEARS!"

I.M. Meen's defeat.
Add a photo to this gallery 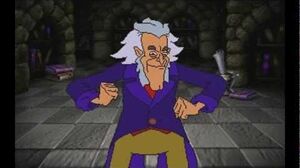 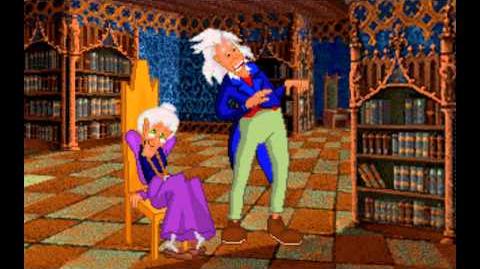 Chill Manor - Win (HD 720p)
Meen's appearance at the end of Chill Manor.
Add a photo to this gallery

Retrieved from "https://villains.fandom.com/wiki/I.M._Meen?oldid=4209993"
Community content is available under CC-BY-SA unless otherwise noted.