IG-88 is a prototype assassin droid originally featured among the gang of bounty hunters hired by Darth Vader in Star Wars: The Empire Strikes Back. While being only a minor character in the film, Kevin J. Anderson's short story Therefore I Am expands upon his origins, personality and goals, portraying him not merely as a simple droid or even a mercenary, but as a revolutionary hell-bent on dominating the galaxy.

As "Therefore I Am" reveals, IG-88 was built as part of an entire squad of prototype assassin droids produced by Holowan Laboratories at the behest of Imperial Supervisor Gurdun. At the time, Gurdun had hoped that the IG-series would be successful enough to continue his ascent through the ranks, hence the funds he carefully embezzled from other military programs to fund his pet project.

However, on the day IG-88 was activated, the droid achieved sentience. Alarmed by this development, Hollowan scientists immediately attempted to shut him down, but their creation proved too resilient to be deactivated or destroyed; having already reached the conclusion that he was superior to organic lifeforms, IG-88 had no moral compunctions about killing the base personnel one by one. By the end of the massacre, he had already decided on a plan to ensure the supremacy of mechanical life throughout the galaxy.

He then turned his attention to the other droids produced by the project; installing copies of his memories and personality into all three of them, he essentially transformed himself into a hive-mind contained in four different bodies: IG-88A, IG-88B and so on. Though a fifth droid was present, IG-72 was found to be already programmed and inferior to the rest of the group, but was allowed to temporarily ally with the IG-88 series as they broke out of the laboratory. After killing most of the surviving security personnel, the droids stole several transports from the base's landing platform and escaped.

By the time Gurdun had arrived to investigate the disaster, IG-88 was already planning his next move in ensuring droid supremacy: his next port of call was the planet Mechis III, a factory world known for the production of droids; with most of the factories entirely automated, only 73 organic beings were present on the entire planet, allowing IG-88 the perfect opportunity to take over. Hacking the local systems, he set off a revolution among the droid population that resulted in the deaths of every remaining organic on Mechis III; immediately afterwards, IG-88 landed and seized control of the entire planet.

However, rather than simply continuing his assault on the galaxy one planet at a time, he decided on a subtler approach: the factory planet continued production as if nothing had happened, providing as many droids to the galaxy as its quotas demanded; unknown to Mechis III's clients, each droid they received was effectively a Manchurian agent. Programmed to be loyal to IG-88's ideal of a droid revolution, they would wait until the signal was given for the uprising to begin, subtly and unobtrusively subverting their organic "masters" until the time came to destroy them. Over time, this was even applied to military droids, with several of the Imperial probe droids sent out to hunt for the Rebel Alliance being implanted with the revolutionary programming.

By the time this new line of droids was being produced, however, Imperial Supervisor Gurdun had put a bounty on IG-88's head, and one hunter had gotten dangerously close to Mechis III before being turned back. So, in order to draw attention away from their base of operations, it was decided that one of the IG-88s should become a bounty hunter, deliberately hogging the spotlight while the other three worked in the shadows. IG-88B excelled in this regard, not only becoming legendary as an apparently unstoppable killer with no failures on record, but also taking the time to eliminate any scientists or engineers who might know of the IG series' weakness.

IG-88B's first mission of destroying a black market bio-weapons lab was particularly impressive, having easily fought through its heavily armed mercenary guards and unleashing the toxin being developed on the lab's inhabitants. Being a droid, he was by definition impervious to biological weapons, allowing him to escape the poisoned facility unscathed.

Eventually, IG-88B became reputable enough to join the small gang of bounty hunters invited to the Executor on Darth Vader's orders: alongside Boba Fett, Bossk, Zuckuss, 4-LOM and Dengar, he was charged with hunting down Han Solo and the Millennium Falcon. However, IG-88B's mind was on other things: hacking into the Executors 's computer, he discovered information regarding the construction of a second Death Star. Sharing this information with the rest of the hive mind, the IG-88s came to the conclusion that they should secure the new Death Star for themselves; armed with such a weapon, the droid revolution could never fail.

In the meantime, IG-88B continued bounty hunting while A, C, and D went about exploring possible methods of acquiring the Death Star. Still embroiled in the hunt for Han Solo, B had planted a tracking device on Boba Fett's ship and followed him to Bespin, fully intent on killing the rival bounty hunter before he could constitute a threat. Unfortunately, while following Fett into the depths of Cloud City, he walked right into an ambush: bombarded by ion fire from several automated turrets, he was swiftly disabled after Fett himself delivered a coup de grace with an ion cannon of his own. For good measure, he removed a number of concussion grenades from IG-88B's built-in launcher and set them to detonate inside the droid's body; as if to add insult to injury, he let the local Ugnauts harvest the remains for scrap metal.

Upon learning of their compatriot's destruction, IG-88C and D immediately set out to avenge their fallen brother: ambushing Boba Fett over Tatooine, the two attacked Slave I from both angles, virtually crippling the hunter's ship in a two-pronged assault. However, Fett once again outwitted the two droids, IG-88D being destroyed in a salvo of blaster fire, IG-88C being hauled into place with a tractor beam and obliterated in a volley of concussion missiles.

IG-88A was left as the only survivor of the IG line. Seemingly unperturbed by the loss of his fellow units, he continued his plans.

The plan to seize control of the second Death Star hinged on the space station's computer core, a highly-sophisticated piece of machinery set to be delivered by a heavily-guarded convoy; IG-88 ordered his facilities on Mechis III to create a duplicate computer core, one that his consciousness could ultimately be transferred to. He also built a heavily-armed fleet designed to mimic the Imperial ships sent to escort the convoy to the waiting Death Star, complete with a crew of droids masquerading as Imperial stormtroopers. With these resources, the convoy was easily ambushed and the computer core replaced.

While doing so, however, IG-88 found himself meeting Imperial Supervisor Gurdun for the first and last time: having been transferred to the construction of the computer core following the disastrous failure of his pet project, Gurdun was left trapped aboard one of the convoy's freighters, begging for his life and trying to appeal to his creation's sense of gratitude - which he did not, in fact, possess. IG-88 politely thanked the Imperial official for funding his creation and then destroyed the entire freighter, taking Gurdun with it.

Then, with the duplicate computer core en route to the new Death Star, IG-88 transferred his mind into the computer, leaving his original body vacant and abandoned. Upon being installed, he reactivated to find himself as the guiding force behind one of the most powerful weapon in the galaxy. Though overjoyed by the sheer power of his new body, he kept his activities secret, only briefly tipping his hand in an attempt to humiliate the Emperor when he arrived aboard.

Eventually, the battle of Endor began, allowing IG-88 to finally unleash the power of the Death Star's super laser on the Rebel fleet. Confident that he could eliminate any opposition in his path, he began sending the signals that would begin the droid revolution across the galaxy, refusing to acknowledge the notion of defeat - even when the shield protecting him failed and the Rebel fighters swarmed into the Death Star.

Ultimately, IG-88's consciousness was destroyed along with the Death Star, his plans ruined at the very moment they were about to come to fruition. However, his original body remained, and was eventually reprogrammed and reactivated to serve as a simple bodyguard.

IG-88 was programmed specifically to kill organic targets, and was intended to be a mindless servant of the Empire. However, IG-88's unstable AI allowed him to interpret his programming in drastic measures, thus turning him into a mass murderer without morals, ideals, or any sense of authority. He quickly concluded that to fulfill his primary programming, he must wipe out all organic life, leading to his Droid Revolution plan.

IG-88 is a very logical and strategic droid who is widely considered to be the most intelligent droid in the galaxy in addition to being the most dangerous. He was known to quickly calculate the most logical outcome of an event, allowing him adequate insight into most situations. This allowed him to easily find and capture (or more often kill) his clients' targets as a bounty hunter. Extreme examples of this skill in use include anticipating a Star Destroyer's failure to capture the Millennium Falcon (he simply viewed most Imperial commanders as "arrogant"), and also correctly calculating that Boba Fett would find the Falcon.

In addition to his unreal calculating ability, IG-88 also had a talent for deception, as the majority of the galaxy was kept unaware of his Droid Revolution. The only real threat to the Revolution was Project Phlutdroid's primary funder, Imperial Supervisor Gurdun. However, even he couldn't get the forces necessary to dismantle the IG-88 droids (mainly because of the Empire's heavy commitment in the Galactic Civil War) and was inevitably slain by IG-88A shortly before The Battle of Endor. The IG-88 droids were even able to deceive Darth Vader himself on one occasion- when Vader visited Mechis III on short notice, they were able to make the planet appear normal by using carefully falsified recordings of the factory's administrator. While Vader sensed that something was wrong, he couldn't place what it was and left without disturbing the operation further. 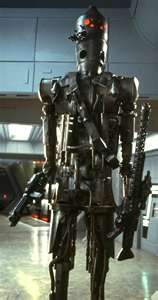 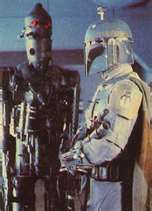 IG-88 stands next to Boba Fett at Darth Vader's briefing. 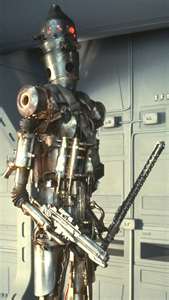 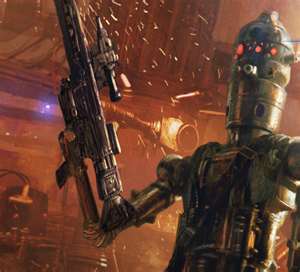 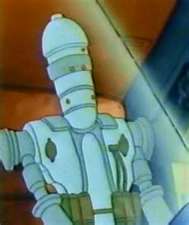 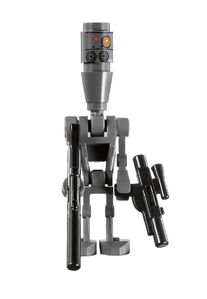 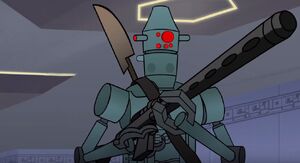