Kill anyone who comes to the Mountainbrook Hotel

Dude, there's no animals. There are no animals, no birds... not even a f***ing fly, no pupae.Alex about the missing creatures.

IT is the unseen main antagonist of the 2014 mystery/sci-fi film "Don't Blink."

A group of ten friends (Jack, his girlfriend Tracy, and her brother Lucas; Alex, his friend Sam, and Sam's girlfriend Charlotte; Claire and Amelia, friends of Tracy; Jack's ex-girlfriend Ella and her new boyfriend, Noah) arrive at an isolated resort far from civilization. Each of the cars is near-empty from the long drive, and nobody has cell service. When they attempt to refill their cars, they find the gasoline tanks locked. Nobody is at the resort, though they find half-eaten food, unpacked luggage, and a car at the pumps, apparently left idling until running out of gas and draining the battery. They can not find the keys for the gas pumps or any landline phones. Jack urges them to remain calm and organizes several parties to search the area for the missing people.

Alex and Claire head to the lake, Tracy and Jack check cabins to the left, and Lucas and Amelia check cabins to the right. The rest stay at the resort, where they continue looking for clues. The other cabins are similarly empty, though Alex and Claire find the lake has frozen over despite the unseasonably warm weather at the resort. They further realize that the there are no insects or animals in the entire area. When the friends regroup, Alex insists they leave immediately. They discuss pooling their gas together into one vehicle, but Jack suggests they stay, as the resort has supplies and the pooled gas will only take them halfway. The situation becomes even more tense when Tracy disappears.

Now worried about Tracy, Jack refuses the leave, and a majority of the others vote to stay behind. Although angry, Alex backs off and warns Jack that anything else that happens is his fault. As the friends debate what to do and search for Tracy, Lucas and Noah disappear, too. Alex retrieves a pistol from his car, and, after Amelia disappears, Sam steals Alex's pistol. Disturbed and panicked, Sam shoots Alex in the shoulder and forces Charlotte to join him as he drives off. His car only goes a few feet before he disappears, along with the keys. Charlotte, who was in the car with him when he disappeared, enters a catatonic state. Alex threatens to kill her unless she explains what she saw, but Jack stop him by punching Alex.

The remaining friends return to the resort, where they agree to watch each other closely. Ella, a nurse, bandages Alex. Jack and Ella comfort each other, and after Jack escorts Ella upstairs, they have sex. When Jack turns away from her, Ella disappears. Noah surprises them by knocking on the door, and Alex interrogates him. When Noah claims to have simply fallen in a ditch and wandered back to the resort, Alex shoots him in the leg despite Claire's objections. Noah continues to profess his ignorance, and Alex shoots him again. Jack protests, but Alex points out that it's too late for him to protest, as he had already tacitly given his approval to torture. Claire convinces Alex to stop, but Alex kicks Noah out of the resort. When his cries suddenly end, they assume he has also disappeared.

Alex says the impending threat of nonexistence invalidates morality. After casually threatening to murder them, he commits suicide to leave behind evidence of his own existence. When they turn away, IT takes his body and blood. After a novelty phone rings, Claire calls for help; the police tell her it will take three hours to arrive. Claire and Jack agree to look into each other's eyes until help arrives. When they lose power, they light candles. The three enter the bathroom when Claire says she must urinate, and Charlotte announces her own disappearance. Shocked, Claire and Jack watch each other in a mirror until they experience micro-sleep and Jack disappears. Claire panics but soon realizes that the emergency services have arrived. A man in black assures her that the situation is under control. After she is loaded in a patrol car, she is horrified to find that she is suddenly all alone and all the emergency workers are nowhere to be seen. 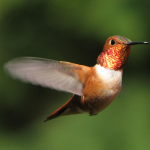