Iago is one of the main characters of the Aladdin franchise.

He first appeared as the secondary antagonist of Disney's 31st full-length animated feature film Aladdin, and its 2019 live-action remake of the same name, which is based on the Arabic folktale Aladdin and the Magic Lamp from One Thousand and One Nights.

He is Jafar's pet parrot.

Iago is just as evil and cruel as his superior, being snide, greedy, selfish, uncaring, murderous, deceitful, manipulative, traitorous, arrogant and cunning. However, Iago is the more aggressive of the two, as well as the more vocal and easily frustrated unlike Jafar who despite being more ruthless, is also more laid-back and sometimes reasonable.  He has a difficult time keeping his comments to himself, lacking a collected demeanor, and can often fall into fits of rage, shouting and ranting on about his annoyances, when things don't go as planned. He also craves for power, as he gave Jafar the idea of marrying Jasmine to become the next Sultan. He also seems to hate crackers (which is not what you would normally expect for a parrot), which the Sultan, apparently being completely unaware of Iago's distaste for them, often fed him directly to the mouth, which also acted as the main reason why he aided Jafar in his treacherous ambitions against the Sultan in the first film aside from being too much of a coward to protest against his master's schemes.

In the first film, Iago has a supporting role as Jafar's sidekick, and also served as his spy, disguising himself as Jafar's mindless pet parrot.

Iago is first seen during his and Jafar's confidential visit to the desert, in the middle of the night, where they are met by a thief, Gazeem. After forcefully handing over a stolen piece of a golden scarab, courtesy of Iago, Jafar is able to create one full, magical scarab, which reveals the location of the Cave of Wonders. Gazeem is ordered to enter in order to steal a magic lamp (as Jafar wishes to use the Genie to take control of Agrabah), but is killed in the process, as a result of being unworthy to enter. A frustrated Iago voices his annoyance, believing their mission to retrieve the lamp will forever be an impossible task to complete. Jafar, however, remains level-headed, and assures Iago that the lamp will be in their possession once they find the "diamond in the rough".

After returning to Agrabah, Jafar and Iago visit the Sultan, needing his diamond ring to uncover the individual worthy to enter the cave. Here, Iago shows his disdain for the Sultan; specifically due to the ruler constantly shoving "moldy, disgusting crackers" down his throat. Jafar reassures Iago that they will no longer have to abide to the Sultan's reign in good time, with Iago gleefully plotting to exact revenge once that time has arrived.

After discovering a boy named Aladdin is the one worthy enough to enter the cave, he travels to the Cave of Wonders with Jafar, though the mission goes awry, resulting in both the lamp, and Aladdin, being lost. Afterwards, at the palace, Iago concocts a new plan involving a rise to power. He advises Jafar to marry Jasmine, which would result in the vizier legally becoming the sultan. Once he holds such power, Iago continues, they'll kill Jasmine and her father. Jafar agrees, but their plot is interrupted by a new coming prince—Ali. Jafar and Iago soon discover that Ali is Aladdin, and holds ownership over the lamp. Iago is sent to retrieve it, doing so by cunningly disguising his voice as Jasmine to lure Aladdin away from the lamp.

With the lamp in his possession, Jafar takes over the kingdom, bestowing Iago with his own turban, to signify his leadership, as well as his own lounge area near the throne, with a throw pillow and plenty of fruit for his pleasure. After scarfing crackers down the dethroned Sultan's throat, Iago wallows in luxury before noticing Aladdin trying to steal back the lamp. Abu, Aladdin's monkey, tackles Iago to prevent him from alarming Jafar, which leads to a tussle. As a battle ensues between Jafar and Aladdin, Iago watches sadistically, rooting for Jafar to eliminate the threat, until Jafar wishes to become an all-powerful genie. Unfortunately for Jafar, this means an eternity of slavery and imprisonment, though his greed and lust for power made him oblivious to this.

As Jafar is quickly sucked into his lamp, Iago tries to flee, only to be grabbed by the villain, and dragged into the lamp, as well. Trapped and annoyed, Iago berates Jafar on his foolish decision, just as the two villains are sent to the Cave of Wonders to endure 10,000 years of imprisonment.

Iago appears as the secondary antagonist in the 2019 live-action remake. His role is pretty much the same, except for the fact that he actually eavesdrops on Aladdin and Jasmine's conversation when the latter deduced the former's identity, which led Iago to inform Jafar about this. Also, Iago was briefly transformed into a giant roc in the climax in order to pursue Aladdin, Jasmine, and Abu when they retrieved the lamp that Jafar stole from Aladdin. He also is not as talkative as his animated counterpart, instead talking more like a real parrot. Also, in the ending after witnessing Jafar being turned into a genie and sucked into a new lamp, Iago tries to fly away, but Jafar spitefully grabs him, leaving both Jafar and Iago to be trapped in the lamp and locked away in the Cave of Wonders for a thousand years as punishment for their crimes.

Unlike most animals, Iago is perfectly capable of human speech (though it remains to be known whether he was taught this or a magic spell was used). In addition, Iago is also capable of mimicking voices as shown in the first film, where he perfectly mimics both Jasmine and Jafar. Like most birds, he is also capable of flight and using his claws to pick up and carry stuff along the way. In turn, he can also use his feathers like prehensile fingers.

Iago appears as a minor character as well as a boss in the videogame adaptations of the 1992 Disney movie Aladdin on Super Nintendo and Sega Genesis.

As well as his role in the film, Iago has also appeared in various video games, probably being in the Kingdom Hearts series.

In Kingdom Hearts, Iago was Jafar's servant. He played a minor role, normally just appearing on Jafar's shoulder in cinematics, though he was the one who stole Genie's lamp from Aladdin. He later appeared holding Jafar's lamp in the boss battle, and flew around with it. The lamp was one of the ways to damage Jafar. Like the movie, Iago tried to fly away at the downfall of Jafar, but ended up in the lamp as well. 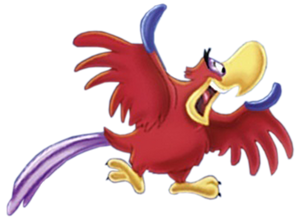 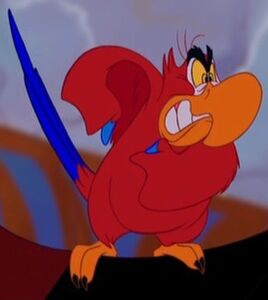 Iago ranting over his hatred for crackers. 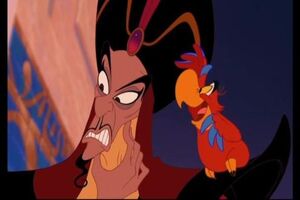 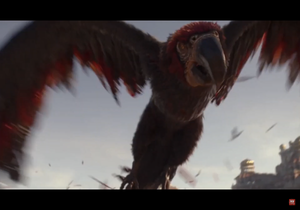 Iago as a roc
Add a photo to this gallery

Retrieved from "https://villains.fandom.com/wiki/Iago_(Disney)?oldid=3967504"
Community content is available under CC-BY-SA unless otherwise noted.