Ensure that King Garon succeeds in world domination.
Kill all the Hoshidan royals (all failed).

Iago is a non-playable character and the secondary antagonist in Fire Emblem Fates: Birthright and Conquest; although in Revelation, he serves as a minor antagonist.

Iago serves as the Nohrian army's prime tactician, as well as a personal retainer of King Garon. Throughout the majority of Fates' story, Iago attempts to set numerous tricks and traps for Corrin to fall into. However, all of his tricks end in failure, much to his frustration.

Iago is first encountered during Chapter 8, where he utilizes his magic to trick the Hoshidan army into attacking a group of innocent members of the Wind Tribe, believing them to be Faceless. He appears to taunt the party, knowing with Corrin on the Hoshido side, he can easily plot against them, before disappearing.

Later on, during Chapter 16, Iago appears and attacks Corrin's group as they enter one of King Garon's villas to find medicine to cure Takumi's illness, but they defeat him and he states that "there is a traitor among their ranks", before telporting away.

Iago later appears again during Chapter 20, stating that he has been given enhanced magic abilities from King Garon and utilizes that power to bring Fort Dragonfall back to life with the Hoshidan army still inside. Iago once again disappears, but not before releasing a small army of Faceless to speed up the army's defeat. Utilizing Azura's song, the Hoshidan army manages to escape before the fortress collapses in on itself, foiling Iago's plan once more.

Iago's final appearance is during Chapter 25. The Hoshidan army encounter him at the staircase leading to the throne room of Castle Krakenburg. Iago immediately taunts Corrin for carelessly leaving the supposed traitor in the army's midst. As it turns out, the "traitor" that Iago was referring to is Takumi, whom he had under a spell during the entire game as he knew of their whereabouts thanks to him. Using the brainwashed Takumi, he captures Azura and threatens to have Takumi kill her. However, Corrin successfully manages to reach out to Takumi, granting him temporary control and Azura the ability to sing her song to free Takumi from Iago's mind control. Enraged that his plans failed yet again, Iago engages the army in battle, only to fail once again.

After being defeated for the last time, Iago cowers and pathetically begs Corrin to spare him, claiming to have been possessed, just like Takumi. However, they don't fall for his tricks and Leo arrives moments afterwards, expressing disgust in Iago's attempt to escape his fate, Iago again begs to be spared, but Leo shuts him up and he mercilessy executes the treacherous sorcerer. Iago screams in agony and dies, putting an end to his plans for good.

Iago's role is much bigger in Fire Emblem Fates: Conquest than Fire Emblem Fates: Birthright. Iago is first met during Chapter 7, where he, along with King Garon, express surprise at seeing Corrin return to Nohr after learning the truth about their family. Iago believes that Corrin is a Hoshidan spy and prompts for an immediate execution, but Prince Xander states that Corrin returned by choice. Garon decides to consult an effigy of the Divine Dragon, Anankos, in order to settle on what to do. Eventually, it's decided that Corrin is to suppress the Ice Tribe rebellion all by themself in order to regain Garon's trust. Iago attempts to change Garon's mind, but to no avail.

As Corrin makes their journey through the Woods of the Forlorn, Iago summons numerous Faceless in order to kill Corrin and stop them from completing the mission. However, with the help of Felicia/Jakob, Silas, Princess Elise and her retainers, the Faceless horde is pushed back.

When Corrin returns to Castle Krakenburg after suppressing the rebellion, Iago tells Garon that Corrin didn't complete their mission alone and suggests that they cut Corrin down defying Anankos' decree. Xander and Elise both step in to defend Corrin, leading to Garon sparing their life and welcoming Corrin back into the Nohrian royal family, much to Iago's dismay.

Iago is later ordered by Garon to make Corrin suffer, but not to kill them. Confused, Iago accepts.

Later on, Iago sends a message to Corrin's group stating that King Garon has requested that they go to Palace Macarath for rest and relaxation. It's shortly revealed to be a trap, as Iago had also alerted Ryoma and the Hoshidan army to ambush the group at the same location. However, this plan is also foiled thanks to Xander sending his retainers, Laslow and Peri, to protect Corrin, who's group manages to hold off Ryoma's group.

He again attempts to kill Corrin by unleashing a horde of Faceless on their group during Chapter 21, which once again fails, but results in the death of Lilith, which Iago is content with.

Iago reemerges following the conclusion of the fierce defense put up by Yukimura, where he and Hans kills all of the Hoshidan prisoners of war who surrendered, but not including Sakura, Subaki and Hana. Although Xander and the others try to stop them from killing any more prisoners, they are halted by Garon, who threatens to execute them for treason if they continue in their protests.

When the Nohrian army reaches the Great Wall of Suzanoh, Iago leads his forces to attack the Hoshidan defences along the wall, tasking the Avatar and their group to defeat their core legion, led by Takumi. When they break through and enter the Hoshidan capital, Iago kills several Hoshidan civilians who insult Corrin for being a traitor, claiming that he will protect them from the "street rats".

Continuing with their progress, they eventually surround Castle Shirasagi, Iago tasks Corrin to break through their defenses, this time led by Hinoka. Corrin, not wanting to spill any more innocent blood, spares Hinoka and asks to give her naginata as proof of her demise.

Inside the castle, Iago asks Corrin if they had killed Hinoka, and they show him her naginata. Iago is not completely convinced and asks if he let Hinoka live, only to be stopped by Garon. The Nohrians confront Ryoma and Iago throws Hinoka's naginata towards him, and tells him Corrin killed Hinoka. Ryoma challenges Corrin to a duel, but is defeated by them. Iago secretly tells Garon to have Corrin kill Ryoma, and when Garon orders him to, they are unable to and Ryoma commits seppuku instead. Iago attempts to have Corrin executed for not complying with Garon's orders, but Garon does not care anymore and allows it to pass as they have conquered Hoshido.

Iago makes one last appearance during Chapter 26. After taking over Castle Shirasagi, Garon forces Corrin and the army to wait outside to the Throne Room. Iago discovers that Corrin spared Hinoka and numerous Hoshidan soldiers, and attempts to kill Corrin for treachery with the aid of Hans. However, Iago's attempt fails, as Xander and the Nohrian siblings betray him, as they have become distrustful of Iago for his schemes and manners towards the Avatar and swear to kill him and Hans for their crimes and being traitors of Nohr, much to his horror. With no other choices, Iago is forced to fight against the Nohrian siblings, hoping to finally kill Corrin for good.

Despite their efforts, Iago fails to kill Corrin and is defeated while Hans and Garon's army are killed in battle. Scared for his life, Iago disgracefully attempts to save his skin by accusing Garon of placing him to fight and that he's "innocent" and he doesn't deserve to die. They ignore his pleas, and Leo, having enough of his mouth and cruelness, calls him out for being a spineless coward and bring shame to Nohr and attempting to kill Corrin many times. Iago is horrified by this and Leo proceeds to kill the begging Iago, dying a pathetic coward and ending his schemes against Corrin, and his tyranny and avenging all the Hoshidan people Iago and Hans killed.

In the end, his plans to kill all the Hoshidan royals, take over Hoshido with Garon and to make Corrin suffer would all be in vain as Corrin still lives, they kill Garon and a possessed Takumi and Nohr makes peace with Hoshido, something Iago would never agree to do.

In Chapter 14, Iago grows suspicious of Xander, believing that Corrin is a "bad influence" on him and that he may turn coat. This suspicion is supported by the fact that Camilla and her retainers joined forces with Corrin's group.

Iago's final appearance is during Chapter 17, where he gathers an overwhelmingly large army of Nohrian soldiers to stop Corrin and their group from reaching the Bottomless Canyon. However, with the help of Xander and Leo, Iago is slayed once and for all.

In a spin-off hack n’ slash, Fire Emblem Warriors, Iago is the main antagonist of Fates chapters. In this alternate continuity after Revelation, Iago is revealed to be alive, and amongst the villains recruited by the Gristonne king Oskar. His first step is to restart the conflict between Hoshido and Nohr again, then kidnap and brainwash Corrin (in default female version) when she goes investigate this sudden situation alone. Iago also brainwashes Ryōma and Xander when they clash again. As each 5 remaining heroic Hoshidans and Nohrians got some help from the heroes of another worlds and timelines (from Aytolis (including Grimstonne’s former prince Darios) and Awakening), Iago is defeated once more, thus freeing both Corrin, Xander and Ryoma from his control, and Iago himself retreat.

Iago is a dishonorable, uncomplimentary, manipulative, and scheming man who takes sick pleasure out of seeing the misfortune of others who fall victim to his plans, especially Corrin. He is also rather arrogant and egotistical; believing himself to be a mage of unrivaled power and intellect. A belief that is often contradicted by his countless failures.

Iago's mixture of underhanded and cowardly tactics have earned him the scorn and distrust of nearly all of the Nohrian army's soldiers, even King Garon to an extent. Despite his high opinion of himself, Iago is a complete coward and a rather inept magic wielder, especially when compared to the likes of Leo, who surpasses him both in combat and intelligence. He is also a hypocrite, as he attempts to dissuade Xander and the siblings not to kill him despite doing the same thing to them using a horde of Faceless towards them and thinks only of himself. His own arrogance and delusional plans would eventually lead to his downfall in all three paths.

When his plans fail and backed into a corner by his enemies, Iago will beg, whine and plea for his life to be spared with not even a shred of shame, regret or dignity, but is ignored and is killed for his actions, dying the pathetic, whiny, cowardly and disgraceful person he always was. 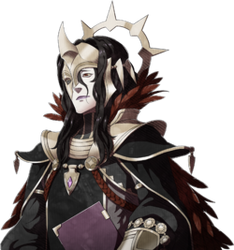 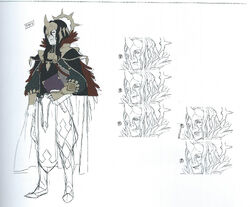 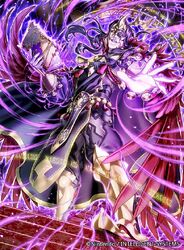 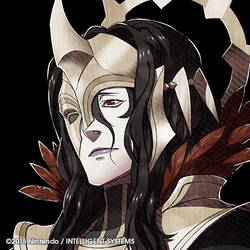