Host for the newscast The Inside Peek

Uses a Vibra-space belt to walk through walls

Ian Peek is the main antagonist in the Batman Beyond episode "Sneak Peek". He is the english host of an infamous tabloid newscast called "The Inside Peek". Peek stole a device from Nabuo Taka, was once the head of the research department on Wayne-Powers, and Peek used it for his own ends. However, after extended usage of the device, it began to make him completely intangible with no way to revert back to normal. He later sinks beneath the Earth's surface and is never seen again. Ian Peek is voiced by Michael McKean.

He was originally a low rated journalist, deciding he needed leverage to help jump-start his career. Peek got his chance when he interviewed a groundbreaking scientist of Wayne Powers, Naga Taka, who explains to Peek about his research on "matter phasing".

Realizing he needed it for his career, Peek stole Taka's device the Vibra-space belt and his research before lighting the place on fire. By doing this, Peek killed Taka who died in the fire and his work was presumed by Gotham authorities to be destroyed.

Peek later uses the belt to walk through solid objects and gets up-close footage on a couple of Gotham's socialites. He exposes boxing trainer Jack Turley's affair with his champion's girlfriend; the musician Jamie Jerald's dealings with DNA splicing; and Paxton Powers neglecting work for good times at a private party. However, unbeknownst to him, the overuse of the device began to inflict permanent damage to his body, which first manifested as acute stomach pains, which he dampened with antacids.

Peek eventually infiltrated Gotham City Hall to videotape a meeting with D.A. Sam Young and gangster Jimmy Lin, who was cutting a deal in exchange for information about the Tong's involvement in illicit activities. On his way out, Peek was seen by a police officer who activated an alarm. Batman intercepted the distress call and chased after Peek. However, in his intangible state, Peek was untouchable and escaped.

After the events that transpired, Peek broadcasts the video on his show. Batman figured out Peek was the intangible man and paid a visit to the reporter, who refuted his accusations. At that moment, Peek was attacked by a vengeful Jimmy Lin and his gang. He ran into a closet and activated his belt to escape the building. Outside, he bumped into the Batmobile and seized the opportunity to plant a video camera inside. With this, Peek uncovered Terry's secret identity as well as Bruce Wayne's involvement as the original vigilante.

Afterwards, Peek broadcasted an edited footage of the video, showing a few images of the Batcave and blurred out images of Terry and Bruce and announced the reveal of their identities on the night edition. The major media event soon became the talk of the town, with all of Gotham excited to learn the answer to their city's biggest mystery for decades. Later, Peek encounters Terry (as Batman), who demands him to leave Bruce out of the exposure. Peek mocks him and made Terry admit how much Bruce meant to him and how much the Batman legacy meant to the people of Gotham. Peek refused to cancel the broadcast or even leave Bruce's name out of it, however, leaving Terry at a loss.

Later that night, Peek was preparing for the awaited event, but his stomach pains began to get worse. He then saw an intangible hole growing in his stomach. This caused him to postpone the broadcast, much to Terry's relief and every other Gothamite's disappointment. He called Bruce for help, and when he arrived, Peek revealed his condition and pleaded for medical treatment. He also admitted to the circumstances of how he acquired the belt and what he did to Taka, which angered Bruce. Bruce walked away to leave Peek to his fate as punishment for his crimes.

Seeing this, Peek tried to hand over the only unedited video recording exposing their secret but was still ignored. Furthermore, given how fast the blotch was spreading, Bruce most likely realized that Peek may have been too far gone to save.

The intangible blotch soon started spreading all over Peek's body. Bruce's rejection infuriated Peek who then jumped on him and tried to kill him. Terry (as Batman) then arrived, and Peek responded by holding them briefly at gunpoint, before his hand became intangible and dropped the gun. Peek then rapidly lost the rest of his physical form and started to fall through the building. Terry went after Peek and caught up with him on the ground floor and tried to pull him up, imploring Peek to concentrate to retain his solidity. For a few seconds, it worked, but Peek once again lost control of his physical form and sunk into the solid ground. His fate remains unknown, though Bruce pointed out he would keep falling until he reached the Earth's core, which would surely kill him if he didn't lose his whole substance first. Bruce managed to recover Peek's recording, saving his and Terry's secrets.

Ian Peek is a power-hungry, greedy, arrogant, ruthless, and self-centered individual who cares only about himself. He was even willing to expose Terry McGinnis' secret as Batman and Bruce Wayne's involvement with Terry in order to boost his career.

Peek also stole Nabuo Taka's device and left him to die in the fire he started, showing no remorse whatsoever. He later used his research for malevolent reasons, showing how willing he is to get recognized and become Gotham's greatest newscaster.

Ian Peek in his intangible form 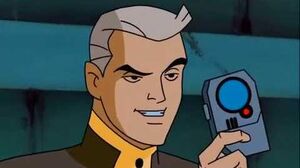 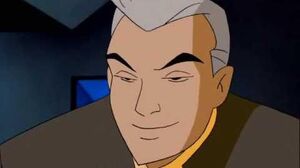 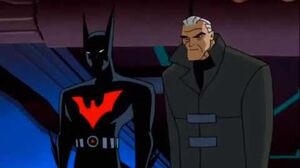