Super Sonic (nicknamed Iblis, also known as Fleetway Super Sonic, or Evil Super Sonic), otherwise known as "The Iblis", is a major antagonist in Sonic the Comic and is notable for being one of the few examples of a traditionally heroic character being depicted as not only aggressive but outright evil, so far this is the only media in which Super Sonic is a true villain.

In the reality of Sonic the Comic, things work very differently than they do in traditional Sonic settings and when Sonic becomes his famous alter-ego, his inner darkness is unleashed in a spectacular, world-shattering flurry of unbridled violence.

Things only got worse for Mobius when Sonic managed to rid himself off Super Sonic's influence - effectively creating a new entity as Super Sonic became a separate being in his own right, a type of "Anti-Sonic" with the power to destroy entire worlds: he would become one of the more powerful villains in Sonic the Comic but also one of the more rare (perhaps due to his immense power-level).

In Silver's future, Sonic is stuck in his Super Sonic form and has taken the name Iblis. His true form is a fiery specter that surrounds Super Sonic.

Sonic possesses even greater speed and physical strength than Sonic normally does, examples being that he was able to carve a giant statue of himself out of lava as a volcano erupted and defeat opponents that Sonic struggled in vain against with ease. He is so strong that he can even tear and damage solid Megatal, a Mobian metal long believed to be completely indestructible. Super Sonic is also essentially invulnerable, being immune to flames and most other forms of damage.

Super Sonic has a myriad other powers derived from emerald radiation. Among his most commonly used powers are the ability to fly at tremendous speeds, and the ability to fire highly destructive beams of energy from his eyes, which are always depicted as maniacal red spirals. He can also cast energy shields, and super-charge his body to cause massive explosions. One such explosion caused an electromagnetic pulse powerful enough to knock out electricity all over Mobius. In his final appearance, whilst fighting against Knuckles he used a green mist to leech energy, draining the echidna of his power.

Super Sonic suffers from Dissociative Identity Disorder (DID) and when exposed to Chaos Energy enters an extremely violent and homicidal state of psychosis,  when his energy is drained he becomes friendly and helpful. This is because his brain cannot control the energy that he uses. For a little while Super sonic worked at The Groovy Train (A coffee bar) after he was drained of his powers and lost his memory. He turned crazy again after he tried to save some kids from a crashing school bus. 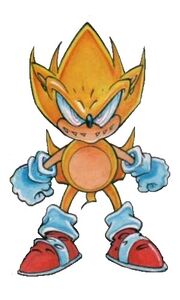 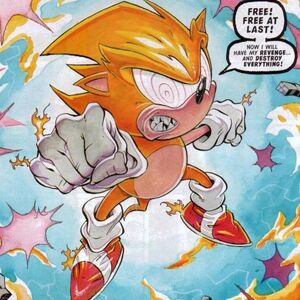 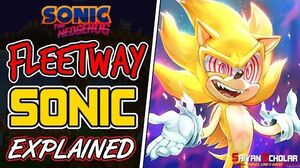