Second-in-command of the Brotherhood of Makuta (formerly)

Leader of the Brotherhood of Makuta

Fighting and killing his enemies.

Sabotage the Plan and take control over the Brotherhood of Makuta and rule the Matoran Universe.

Kill the Toa Nuva and their allies and prevent them from reawakening Mata Nui.
Destroy the Order of Mata Nui. (all failed)

Icarax is a major antagonist that appeared in the BIONICLE series. He later serves as the main antagonist in the Karda Nui arc.

Shortly after the Destral fortress's construction was completed, Miserix; the leader of the Brotherhood sent Icarax, Mutran, and his servant Pridak to the island of Xia, for the purpose of ordering the Vortixx to charge lower prices for their goods. After several days of negotiation, Icarax then lost his temper and proceeded to destroy several buildings. As the result, the Vortixx hastily agreed to the Brotherhood's demands. Soon afterwards, he and Mutran were forced to drag Pridak from the island.

Later after few weeks after Pridak left the Brotherhood of Makuta and found the League of Six Kingdoms , Makuta Teridax,  Icarax and Mutran were presented in the meeting with the two members of the League of Six Kingdoms; Kalmah and Ehlek who have arrived into Destral as the Barraki discussed that the Brotherhood sent the war Rahi for them in exchange of the freedom in Metru Nui.

Following the end of the Matoran Civil War, Miserix assigned Icarax to watch over the island of Karzahni.

When Makuta Teridax called for a meeting between the members of the Brotherhood of Makuta in the Convocation Chamber to reveal his plan of overthrowing the Great Spirit, Icarax remained silent as he doubted of his plan. Ultimately, he and Krika were the last to side with Teridax and he later assisted Gorast in executing all the other Makuta who were still loyal to Miserix. He then placed the Kanohi of the dead Makuta in the chamber as a warning to the remaining Makuta.

A few weeks later, Icarax, along with the other Makuta, were evolved into the Antidermis as they now need to possess the others' bodies to survive. His armor was later modified by the Nynrah Ghosts under the order of Teridax in order to accommodate for the Antidermis form.

Following the raid in the island of Artahka, Icarax began to lost faith in Teridax's leadership and chose to conquer the Matoran Universe through his sheer strength. Along with small army of Manas, he attacked the Northern Continent and manage to destroy the village. However, Teridax arrived and confronted Icarax and as punishment of defying him, he had Icarax to fight with him for hours until he became exhausted and Teridax defeated him. However, Teridax decides to spare him for he still had the use for Icarax's talents and found his lust for battle amusing.

When the Toa Hagah rebelled against the Brotherhood, Icarax and the other Makuta were ordered to stop the Toa Hagah. However, he was defeated by Gaaki and Pouks.

Taking over the Brotherhood of Makuta

While Makuta Teridax was on Voya Nui, he telepathically communicated with Icarax and told him to retrieve his Kanohi Kraahkan from his lair Mangaia. Icarax then went to Mangaia and retrieved it before wearing it before returning to Destral.

After returning to Destral, Icarax claimed Teridax's throne for himself, successfully taken over as the leader of the Brotherhood of Makuta.

When Gorast was ordered by Makuta Teridax to gather all the Makuta to invade Karda Nui, she told Icarax to gather Antroz, Vamprah, Chirox, Krika and Bitil as she went with them. However, Icarax believes that Teridax's orders were almost insane and refused to go, despite Antroz's efforts of convincing him to do so.

When Vican arrived into Destral to bring word of Antroz's request for help, Icarax interrogated the Shadow Matoran and set him free to tell Antroz that if Icarax was to give orders, Antroz should not control his actions.

Later, Icarax was approached by Mutran who informed him that the invasion in the Matoran Universe was ordered by Teridax himself as well as the whereabout of the Kanohi Ignika, which recently surfaced in Karda Nui. He also learned that Pridak was once possessed the mask and he still have the Ignika's energy lingering in him and was currently imprisoned in Daxia along with Kalmah and Mantax. Icarax then orders the Brotherhood of Makuta to invade Daxia and capture Pridak.

Icarax, along with Mutran and their army, stormed onto Daxia and attacked the island. Despite the Order of Mata Nui's attempt to defend the island, Icarax broke through their defenses and defeated all the members before heading towards the fortress. He eventually made his way into the Pit but was stopped by Botar and Trinuma as he engaged them in the battle. During the battle, Icarax stabbed Botar on his back and killed him with his magnetic powers and severely injured Trinuma, though he managed to survive. Unopposed, Icarax makes his way towards Pridak's cell. Once there, he tore the cell door open as Pridak was shocked, thinking Icarax as Teridax and that he killed him. However, Icarax corrected him that he was now a leader of the Brotherhood, though the Barraki was unfazed by this as he warned Icarax that the League of Six Kingdoms will rise again and that the Brotherhood will fall. Icarax responded by kicking Pridak towards the wall as he fell unconcious. Icarax then picked Pridak up and attempt to escape from the island with his prisoner, only to be intercepted by the Order members and then Takanuva, who had arrived into the island. When Takanuva was about to attack Icarax, Mutran intercepted his attack and allowed Icarax to escape from the island as Mutran engaged the Toa of Light in the fight.

After returning to Destral, Icarax brutally tortured and interrogated Pridak about the whereabout of the Ignika. When the Barraki refused to answer, Icarax then proceed to beat him up

While still in Destral, Icarax was enraged when he learnt of both the failures of the capture of Metru Nui and the mission in Karda Nui, though Antroz managed to return to Destral while his teammates were defeated by the Toa Nuva and Toa Ignika. Desperate, he decided to gather all the army to prepare for the final attack in the Matoran Universe.  However, what he never expected is that the Toa Nuva and their allies have arrived in Destral in order to get to Codrex to reawaken Mata Nui. Icarax then ordered Antroz and Mutran to lead the army to stop the Toa from achieving their destiny. When Icarax learnt that Tahu, Gali, Onua and Ignika manged to enter into the fortress to search for the Codrex, he decided to confront the heroes himself. He then confronted the Toa and began to attack them and managed to defeat Tahu, Gali and Onua, though Ignika uses his life power to devolve the Makuta back into the biomechanical being. Tahu then struck Icarax with his fireball, causing him to scream in pain. The Toa took the opportunity to get away from him as he became even more angrier as he relentlessly chased after them. He eventually manage to stalk them into the Codrex as he ambushed Ignika once he was inside. He then engaged the Toa of Life in the final battle. At first, both the combatants were both matched, but Icarax informed the Toa about its doomsday countdown, mocking it about its lack of knowledge and the Toa Code in order to confuse the Toa of Life. When Ignika was shocked of this, Icarax took the opportunity to blast him with his Shadow power and he disarmed him. But just before Icarax could deliver the final blow on Ignika, he was suddenly attacked by the mutated Pridak as the warlord relentlessly attacked Icarax. Icarax then retaliated by slicing off Pridak's mutated arm as the Barraki screamed in pain.

Icarax was a brutal, aggressive, ambitious, and exploitative Makuta who gave himself the aura of the executioner alongside Gorast. Even before the corruption of the Brotherhood of Makuta, Icarax doesn't cares about the Matoran and view them as dependent and weak beings.

Aside from that, Icarax also didn't hide his disgust and envy towards Teridax as a leader, since he once fought with him which ended his defeat. He found savagery and destruction of the entire areas as the ideal method of conquest and despised complex strategies which took time and preparation, but that didn't stop him from using his intelligence to try to usurp Teridax's plan and won't hesitate to defy his rule.

Like the rest of the Makuta, Icarax was also arrogant, sadistic, cruel, egotistical, and overconfident. He also cares a little for his fellow Makuta and believed them as fools who blindly followed Teridax's plan which costed their lives. He also despises Krika even though they were the last to join Teridax, though he was willing to give Krika an order to sabotage the Plan.

Icarax was one of the most powerful Makuta due to his combined sheer strength and cunning mind which rivalled Teridax's. He is a vicious brute as he was able to defeat his opponents as well as destroying objects with ease. He was also skilled at hand-to-hand combat as he was able to keep up with Toa Ignika during the final battle as well as killing Botar with his Magnetism power and wounded Trinuma.

Like the rest of the Makuta, Icarax also have to ability control the element of Shadow element as he can shoot out dark energy and channel his Shadow Hand to grab his opponent and pull him or her into his body to strengthen him. He once wore the Mask of Scavenging, though he later wore the Kanohi Kraakhan until it was destroyed along with him.

Icarax also have his arsenal of weapons. His primary weapon is the Rotating Shadow Blades as he used both as the shield and as the projectile weapon. His secondary weapon was the Twin Sword, the double-bladed sword that can enabled him to channel his Shadow power. He also carried a Tridax Pod with him, though he never used it in the story. 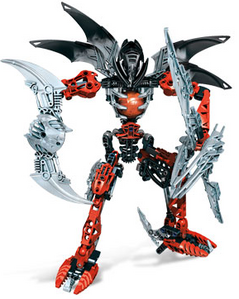 Icarax in his set form. 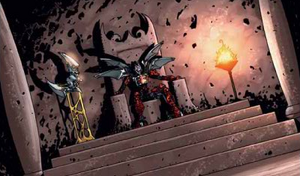 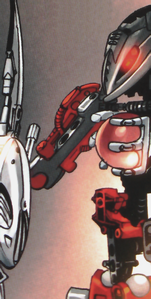