Reach the Sisters of Fate to undo his fate in order to reunite with his father Daedalus.

Kill Kratos to prevent him from reaching the Sisters of Fate (both failed).

Icarus is a major antagonist and one of the bosses in God of War II.

He was voiced by Bob Joles.

Icarus is a mortal and a crazy old man wearing a toga who has a pair of wings on his back. His wings appeared to be man-made, worn out, wrinkled and melted, because he flew to close too the sun.

Icarus is the son of Daedalus. Daedalus created the wings that Icarus has on his back. However, when Icarus was flying, he flew too close towards the sun, resulting in the wax that held the feather to melt, which caused Icarus to fall toward his death. Icarus ended up falling into the underworld. Icarus was eventually driven insane due to the torment of his prison and his own prideful failure. Icarus spent decades in an attempt to recreate the wings. Eventually he managed to create a new pair of wings, and use them to escape the Underworld. Though he managed to escape, Icarus sought to save himself from his pitiful existence by reaching the Sisters of Fate to prevent his death and reunite with his father.

When Kratos was after the Sisters of Fate, he encountered the crazed old man with wings named Icarus. Icarus tried to dissuade Kratos from his path, though the latter attempted to ignore him. After Icarus mentioned that he was the one who was suppose to see the three sisters, he told Kratos that he would fail. However, Kratos said that he was going to get to the sisters with the help of Icarus' wings. Refusing to let Kratos go across the chasm, Kratos and Icarus start a confrontation.

Both of them fought each other while they were both falling from the sky. During the fight, Icarus will try to ram Kratos onto the edge of the Chasm several times. When Kratos climbs on Icarus' back, Icarus tried to convince Kratos that the Gods brought him there to help Icarus.

However, Kratos didn't listen and ripped the wing off of Icarus' back, causing Icarus to fall into the River Styx which kills the old man and granting Kratos the power of limited flight. 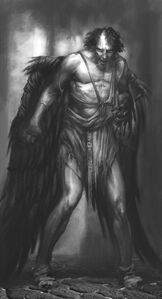 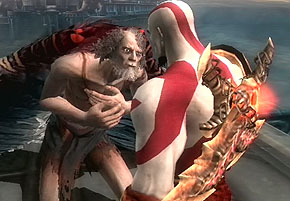 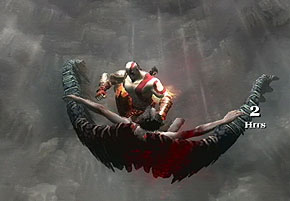 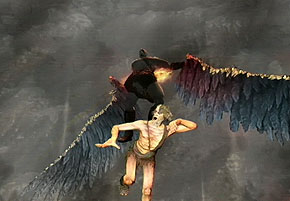 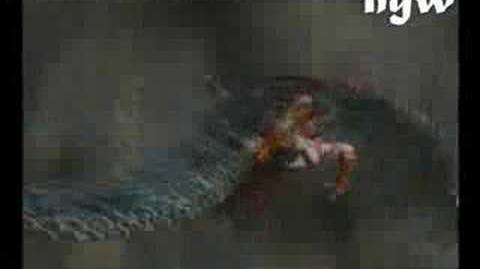