Kill other Digimon to prove he is the strongest there is.

IceDevimon was a minor villain in both Digimon Tamers and Digimon Frontier, and one of the main antagonists in Digimon Fusion.

IceDevimon was a serial killer who killed and absorbed many Digimon in order to become more powerful. He Bio-Emerges in the Real World and begins stalking Rika Nonaka, who he believes to be as harsh and cruel as himself, and able to make him even more powerful. He tries to tempt her with describing his power, eventually seizing her and taking her to his frozen lair atop a skyscraper. Though he shows her a frozen graveyard of his amassed lifeless victims he killed for many decades, she is horrified by this terrible sight and is able to resist the temptation and refuse his offer. He then demands a duel against Renamon, who starts toward the lair. Meanwhile, Takato, Henry, Guilmon, and Terriermon arrive and try to rescue Rika, but IceDevimon encases the Digimon in ice. Renamon appears, but IceDevimon is too powerful for her, and even after Rika declares that Renamon is her friend and Renamon digivolves to Kyubimon, she is unable to defeat him. Guilmon and Terriermon then break free of the ice, and Takato uses "Speed" and "Hyper Wing" cards on Guilmon, allowing him to destroy IceDevimon and absorb his data. Because of this ordeal, Rika again had trouble with accepting Renamon as a friend, and she nearly gave up being a Tamer.

An IceDevimon was a comical mass murderer in the Digital World, infamous for destroying villages (Gekomon and Deramon were seen running from him) to absorb the Fractal Code of the Digimon (Vegiemon and Gesomon were seen as two of his victims) who resided there. It took an entire army to captured the wicked IceDevimon (the only Digimon seen were ExVeemon, Aquilamon, Kabuterimon and Starmon; everyone else was offscreen) and seal him under Cherubimon's Castle as not even Cherubimon himself could destroy this psycho (this is unusual, as IceDevimon is a Champion and Cherubimon is a Mega. However this can be attributed that IceDevimon gained power from all the data he absorbed.).

During Cherubimon's evil reign, IceDevimon fed on the failed candidates for the Spirits of Darkness. Once the castle was destroyed, IceDevimon was freed to resume his love for killing things, starting with the DigiDestined out of seeing how human data 'tasted'. He froze Takuya and Koji's D-Tectors so that he can have them first and cause some difficulties to the others. IceDevimon trapped Takuya and Koji in a force field and put up a fight against JagerLowemon. However, he was finally defeated by JagerLowemon and purified by Loweemon after Zephyrmon, Korikakumon, and MetalKabuterimon combined their attacks to crack him. JagerLowemon then defeated IceDevimon with his Dark Master attack, and Loweemon purified him.

IceDevimon is one of the antagonists in the first half of Digimon Fusion. He was serving under Laylamon as a member of the Bagra Army, IceDevimon attacks the Lake Zone with a large army of Icemon and Troopmon when Xros Heart intervenes.

IceDevimon appeared a second time and he tries to corner Beastmon secretly through the sewer, while most of his army are attacking from outside the castle. However it's interrupted by the Fusion Fighters. Hoping to win this time, IceDevimon absorbs his army of Icemons to form IceDevimon Enhancement Absorbent, but still fails to win.

IceDevimon is a white and purple version of Devimon, but IceDevimon is still a Champion Level Digimon however, and is an ice demon.

Much like MadLeomon and AncientVolcanomon, IceDevimon can absorb the bodies of his troops to become stronger.

IceDevimon Enhancement Absorbent is the form of IceDevimon after absorbing his Icemon minions, when he fails to corner Persiamon. In this form, he resembles a giant version of IceDevimon with bigger wings and bigger arms. He overpowers everyone until he is reverted to his normal state by the Checkmate Break unison attack of Knightmon and the PawnChessmon (White).

IceDevimon is very wicked, and is a sadistic mass murderer, delighting in the pain he deals on others and relentlessly killing without mercy; however, in Digimon Fusion, IceDevimon is less evil and is used as comic relief.

IceDevimon can freeze his opponents and leave them in suspended animation. As seen in "The Icemon Comth", he had absorbed several Of his victims data and left their lifeless bodies frozen. Despite being a Champion Digimon, he is a powerful and strong Digimon. He can absorb his minions to get more strong. 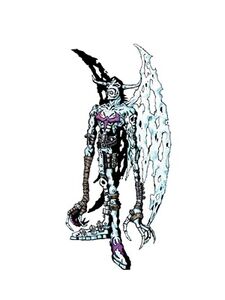 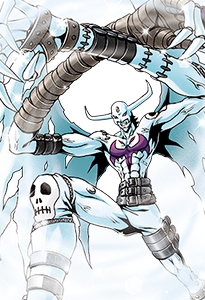 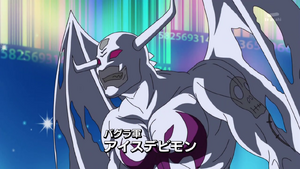 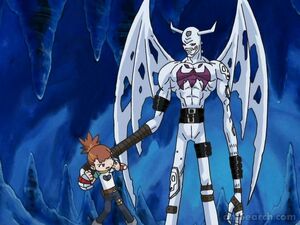 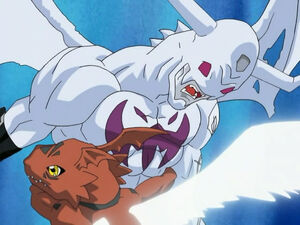 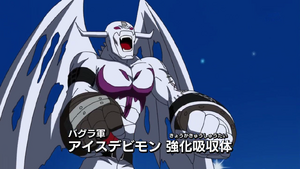 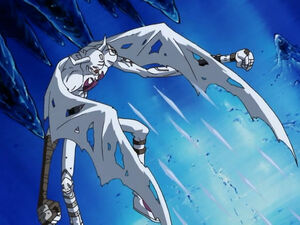 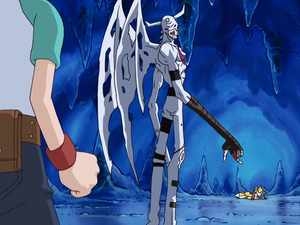 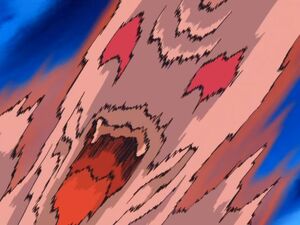