Eat the fat boy and rape the girl (failed).

The Ice Cream Man is the main antagonist in the 2009 animated horror short film Who's Hungry?. He is a murderous ice cream seller who kidnaps children, so that he can turn them into ice cream.

Although the short film does not have any spoken dialogue or too much noises, his screams were provided by Frank Welker who also once voiced Frankenstein's Monster.

The animation starts with two little children going towards the Ice Cream Man's truck. One of the children being a fat boy which started to run towards the truck, and the other being a skinny shy girl. Once the boy arrives at the truck, the man gives him an ice cream. While the girl is standing behind. The man gives the girl an ice cream as well. Eventually, the man takes both the girl and the boy inside of his truck, driving to his home.

He locked the girl inside of a locker, placing her on a giant hook. While he pushes the boy inside fo an ice freezer. In the freezer was another boy which got frozen to death. The man takes the frozen boy in his hand, pushing his body into a blender, blending him. As the girl gets off from the hook, she sneaks behind of the man with the hook.

While he is watching TV and eating the blended boy. She smacks the hook on his back making him pass out. As the girl runs towards the freezer, helping the fat boy escape. As they are slowly sneaking out, the fat boy sees the blended boy, thinking that it is ice cream. The boy went towards it, taking it and eating it. When the man stands up, he started to chase the two.

As the boy's ice cream fell from his hands, the man slipped on it, falling into the blender stuck inside. As the girl runs towards the blender, blending the man to death. The man then takes the girl in his hand, holding her, as the boy went towards her giving his hand to her, helping her get out of his hand. The ice cream man eventually gets killed by the blender, as the two escaped. 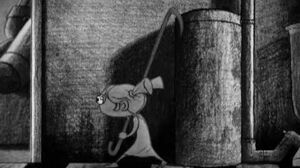 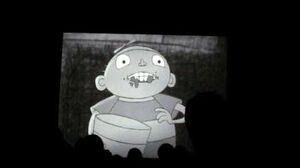