Minion of the Delightful Children From Down the Lane

The Ice Cream Monster is a minor antagonist in Kids Next Door. It is a giant ice cream-comprised beast made of vanilla, strawberry and chocolate created by the Delightful Children From Down the Lane against Sector V of the KND (Kids Next Door).

In the episode "Operation I.-S.C.R.E.A.M.", The Ice Cream Monster was made by the Delightful Children From Down the Lance to destroyed the Kids Next Door, namely Sector V. Firstly, the creature stomps on Numbuh 2. Secondly, shoot ice cream cones to pin Numbuh 1 against a wall. Thirdly, spitting cream (with a cherry) on Numbus 5. Finally, dipped Numbuh 4 into melted chocolate, causing him to be immobilized. The Ice Cream Monster prepares to finish off Numbus 1. Fortunately, Numbus 3 couldn't stand the coldness in ice cream factory, so she triggers the heater to billion degrees. As result, causing the monster to be melted. 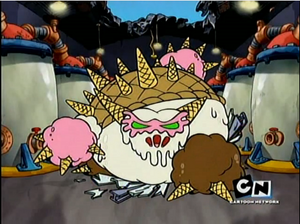