Ruler of the Ice Kingdom (formerly)

Find a princess and marry her.

Simon Petrikov, better known as the Ice King, is a major antagonist and anti-hero in the Cartoon Network series Adventure Time. He appears as the main antagonist of the first and third season and a major character for the remainder of the show. Though initially the main antagonist, his role has shifted into a tragic villain/anti-hero.

He was voiced by Tom Kenny, who also played Chester in Kids Next Door, Mumbo Jumbo in Teen Titans, Patches in The Powerpuff Girls, Reverend Rosty in Brickleberry, and Commander Peepers in Wander Over Yonder.

A Christmas-themed episode ("Holly Jolly Secrets Part II") revealed the tragic backstory about the Ice King by a video. Sometime before The Great Mushroom War, the Ice King was Simon Petrikov, a young glasses-wearing human who was working to be an antiquarian. One day, he bought a crown and went to show it to his fiancee Betty, whom he dubbed "Princess." He put the crown on his head for a laugh, which made him do something so terrible (of which he had no memory) that Betty left him. He then begins to slowly lose his sanity and look more and more like the "Ice King". It is revealed that he kidnaps princesses to fill the gap made when Betty left him. Finn later develops for his nemesis, because he knew that he was once human.

Sometime during the Great Mushroom War before Simon became Ice King, he met a young Marceline in the middle of the wreckage. He then comforted her by giving her a teddy bear from a destroyed toy shop. He also tried to find her soup after finding out that she was sick, though he had to protect her from unknown creatures.

The Ice King is the lonely king of the Ice Kingdom. He constantly kidnaps princesses (including Princess Bubblegum) in hopes that one of them would marry him, even if he has to threaten them with death. He is a lowly villain and was easily defeated by his own heart, Ricardio. He has a small gold crown with three red jewels that gives him all of his magical ability, and keeps him alive. He was previously hated by Finn, Jake, the princesses, and almost everyone who met him. He has a bond with the penguins of the Ice Kingdom, though. Especially one of them he called "Gunther". He has a long beard and blue skin (as an effect of the crown) and a blue robe that makes his body look big, though he is really skinny. He first appeared in "Prisoners of Love". The Ice King seems to have a bad habit of threatening others to do his bidding.

In "Betty," after a demon made of anti-magic negated powers from wizards, including the Ice King, his crown lost its power and he turned back into his previous self, Simon. However, since he had his ice powers (which granted him anti-aging by keeping him as an elderly man) for over 1,000 years, Simon started dying, and the Ice Kingdom was melting. Since Simon was his old self again and could think well, he wanted to use the little time he had to communicate with his girlfriend who left once he first put on the crown, Betty. While he was contacting her, Betty jumped through the portal into the present and was determined to help her fiance regain his powers before it was too late. When Betty defeated the monster back in Wizard City, Ice King and everyone else got their powers back. Afterwards, the Ice King was seen in his castle explaining the story to Muscle Princess (whom he had her feet frozen in ice). Betty left and was determined to keep Simon alive, and as his sane and non-icy self.

In the series finale, Betty took the crown from him and used her power to keep Simon alive, thus is reverted back into Simon Petrikov once again. But this time, he wasn't going to die of old age.

Ice King is a blue-skinned man with unusually pointy fingers, pointy toes, sharp teeth, and a long, goblin-like nose. He wears a dark blue tunic and has a lengthy white beard that covers most of his body. Although his robe gives him the appearance of a fat and small/short man, Ice King's body is in fact exceptionally thin and tall.

As Simon Petrikov, he was a man with olive skin and dark brown hair. He wore glasses along with a tuxedo. After putting the crown on, his eyes turned white and his appearance slowly began to change to that of the Ice King's.

Though in earlier episodes the Ice King was portrayed as short-tempered, argumentative, and disagreeable, due to his main antagonistic role, he is merely a nuisance and "isn't usually a serious threat", according to Princess Bubblegum. Despite this, he is still capable of causing harm to others (whether intentionally or unintentionally).

In later episodes, due to no longer acting as the main antagonist, he is portrayed as more genial, easy-going and having a sense of humor from time to time, particularly due to considering Finn and Jake his "friends" after the events of "What Have You Done?".

The Ice King is a misunderstood, lonely, and sad being who only hopes of marrying a princess. He has been labelled as a "sociopath" by the Cosmic Owl, though his personality seems more akin to a person with narcissistic personality disorder, as he still feels humiliation and guilt. Due to his poor social skills, enduring short attention span and arrogant nature, Ice King is unable to attract any of his prisoners and often resorts to a forced marriage instead of the loving relationship he desires. However, he can be a loving and selfless person as revealed in "Princess Monster Wife". Aside from Gunter, his other penguin guards, and numerous ice creatures, Ice King expresses a continual zeal to spend time with anyone who will tolerate his company, especially Finn and Jake. In "The Eyes", he takes on the disguise of a horse to spy on Finn and Jake in an effort to learn how to be so happy, but this fails as well.

Despite the Ice King's more antagonistic role, he plays the part of a protagonist in "Mortal Recoil", as he helps Finn and Jake defeat Princess Bubblegum by freezing her Lich-possessed body. In the mini-episode, "The Wand", he actually helps Finn and Jake regardless of the fact that Finn said to "sacrifice" himself, but unbeknownst of the fact that it also changed his face.

Ice King is harmless and nonviolent in nature, and only kidnaps princesses and steals out of desperation. However, in the episode "Loyalty to the King", when he does have the opportunity to marry many princesses, he secretly plots to make an elite army of wives to take over the world with. His misunderstood intentions may either be in question or may just stem from his lunacy. Over the many years, his crown has made him insane, affecting his social skills and causing him to unintentionally do bad things. Friendship and companionship are all he really wants, albeit he often goes about it the wrong way.

Due to the insanity brought by wearing the crown, Ice King seems to have a limited memory. This was first seen in "I Remember You", where he does not seem to remember his past as Simon Petrikov, even though he saw the history (after he found the crown) in "Holly Jolly Secrets Part II". Later on, he does not remember who Neptr is, even though he was the one that wanted Neptr to accept as his father in Neptr's debut, "What is Life?", and even confuses him with BMO, as seen in the events of "Mystery Dungeon".

Ice King seems to find his happiness in his own Imagination Zone, and it is clear that he would rather live in his Imagination Zone than in the real world. In "Fionna and Cake", he is shown reading his gender-swapped fan fiction Finn and Jake, based on the events and characters in the actual world. He is shown to cherish his fan characters more than the real-life characters, and in "Mystery Dungeon", he tries to bring the characters to life, but he fails. In "Bad Little Boy", it is revealed that he had made ice sculptures of Fionna and Cake along with writing many other fan-fiction stories.

Although Ice King is characterized by these traits, Simon's personality is completely the opposite: he was known for his intelligence, kindness, and self-sacrifice. From the information given in "Holly Jolly Secrets Part II", Simon was deeply trustworthy, loving, and had a fiancé, Betty. He proved to be the same way as a subservient and watchful guardian over young Marceline during the aftermath of the Mushroom War. Even when they were in great danger, Simon struggled to keep Marceline happy and helped her to always see the best of their situation. He took on a very responsible role in Marceline's life, by not only protecting her and keeping her healthy, but also by teaching her right from wrong and keeping her spirits high (as seen in "Simon & Marcy"). Simon, as a rule, was known for being optimistic even at the worst of times and it is clearly one of Simon's most notable and outstanding attributes. Even while being saddled with a great burden, Simon fought an apocalyptic world while fighting the influence of the Ice Crown. Some of Simon's innermost thoughts and fears of his inevitable madness were revealed in left to Marceline revealed in "I Remember You". Simon agonized over abandoning Marceline in a dangerous world due to his deteriorating sanity. However, Simon, nearing the very end of his humanity feared for his own life, worried that as the crown took him from Marceline, no one would be able to "save him". His vulnerability as a human was most evident just before he permanently became the Ice King.

The Ice King wants to find a woman who would want to marry him, and help to rule his kingdom. As long as he has not found that companion, however, he continues to kidnap a wide variety of princesses and trap them in his Ice Kingdom. In later episodes, Ice King started to respect Finn and Jake and becoming their new best friend by any means necessary has become one of his new goals.

The Ice King may be a misunderstood man who just wants attention and a companion. In the episode, "What is Life?," he wanted NEPTR (Never-Ending Pie Throwing Robot) to be his son, but he failed. In "Prisoners of Love", he was thrilled when he thought Finn and the captured princesses wanted him to dance with him, and when he was in his imagination, he pondered why people did not like him and he wanted advice from Finn and Jake about marriage in "When Wedding Bells Thaw".

In the later episodes, he often tried to be best friends with Finn and Jake, as well as other individuals as well.

Possibly, the Ice King's final main antagonistic role was in the episode "A Glitch is a Glitch", where he unleashed a virus that would delete everything in the world except him and Princess Bubblegum. However, this episode isn't canon to the series. 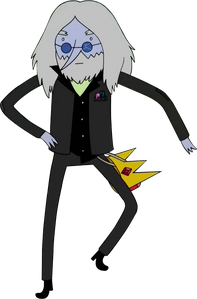 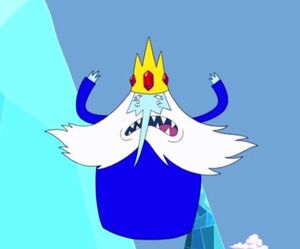 Ice King in the show's intro 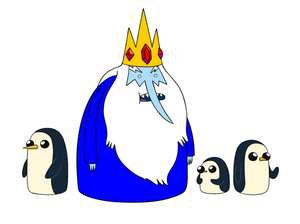 Ice King with his penguins 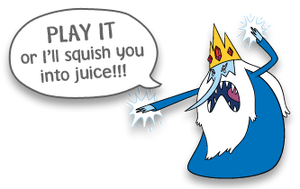 One of Ice King's notable quotes 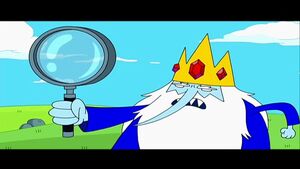 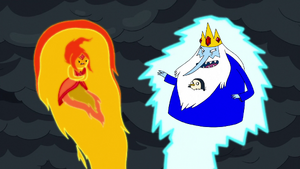 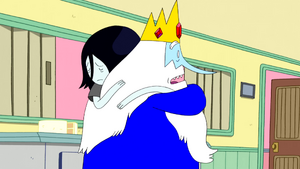 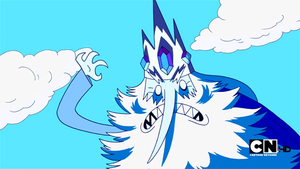 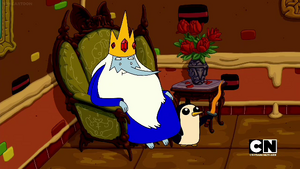