The Ice King was the main antagonist of Adventure Time, a cartoon show on Cartoon Network, often unintentionally.

He is voiced by Tom Kenny, who also played Heffer from Rocko's Modern Life and SpongeBob from SpongeBob SquarePants. He also voiced Scoutmaster Lumpus and Slinkman from Camp Lazlo.

The Ice King is the lonely, sociopathic ruler of the Ice Kingdom. He constantly kidnaps princesses in hopes that one of them would marry him. Even if he has to threaten them with death. He is a lowly villain and was easily defeated by his own heart, Ricardio. He has a crown with three red jewels that help him to bring monsters of snow to life or fly using his beard. It is hinted that he stole it because he's not that good at combat. He is hated by Finn, Jake, the princesses, and even by Ricardio. He has allies with the penguins of the Ice Kingdom, though. He has a long beard and blue skin (most likely from frostbite) and a blue robe that makes his body look big, though he is really skinny. He first appeared in "Prisoners of Love". The Ice King seems to have a bad habit of threatening others to do his bidding.

A Christmas-themed episode ("Holly Jolly Secrets Pt. II") revealed the tragic story about the Ice King by a video. Sometime before The Great Mushroom War, the Ice King was formerly known as Simon Petrikov, a young glasses-wearing human who was working to be an antiquarian. One day, he bought a crown and went to show it to his fiancee Betty, whom he dubbed "Princess." He put the crown on his head for a laugh, which made him do something so terrible (of which he had no memory) that Betty left him. He then begins to slowly lose his sanity and look more and more like the "Ice King". It is revealed that he kidnaps princesses to fill the gap made when Betty left him. The Ice King is saddened, because he used to wear glasses, showing he has no recollection of his former life as Simon Petrikov. Finn later develops deep respect for his nemesis, because he knew that he was once human. Sometime during the Great Mushroom War before Simon became Ice King completely, he met a young Marceline crying in the middle of the wreckage. He then comforted her by giving her a teddy bear from a destroyed toy shop.

The Ice King wants to find a woman who would want to marry him, and help to rule his kingdom.  In later episodes, Ice King started to respect Finn and Jake and becoming their new best friend has become one of his new goals.

The Ice King may be a misunderstood man who just wants attention and a companion. In the episode, "What is Life?," he wanted NEPTR (Never Ending Pie Throwing Robot) to be his son, but he failed. In "Prisoners of Love", he was thrilled when he thought Finn and the captured princesses wanted him to dance with him, and when he was in his imagination, he pondered why people didn't like him and he wanted advice from Finn and Jake about marriage in "When Wedding Bells Thaw". 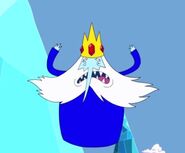 Add a photo to this gallery
Retrieved from "https://villains.fandom.com/wiki/Ice_King?oldid=567482"
Community content is available under CC-BY-SA unless otherwise noted.