One of the Robot Masters

Showing off to people.

Help Dr. Wily in his nefarious scheme to take over the world (failed).

Ice Man is one of the Robot Masters in the first Mega Man game.

Ice Man was originally built by Dr. Light to preform tasks in extreme climates. He was reprogrammed by Dr. Wily who was on a mission to take over the world. Ice Man aided five of Dr. Light's other robots who experienced the same fate.

Ice Man is self-centered at certain times. He likes to show off in front of people. He still deeply care about his friends. As his name suggests, Ice Man loves anything that is related to snow. In contrast to snow, he dislikes heat.

Ice Man's signature weapon is the Ice Slash. It is a sharp blade of ice that can freeze anything. He shoots three pieces of them while jumping around the arena. Mega Man must time his jumps, carefully, to avoid the attack. Ice Man's weakness is the Thunder Beam. 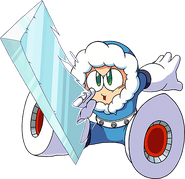 Retrieved from "https://villains.fandom.com/wiki/Ice_Man?oldid=3365679"
Community content is available under CC-BY-SA unless otherwise noted.