Guardian of the Shooting Star (as corrupted)

Larimar, also known as the Ice Monster, is a Gem Monster and a minor antagonist turned supporting character in Steven Universe.

She was voiced by Michelle Maryk while her vocals in her corrupted form were provided by Dee Bradley Baker.

Larimar is a short sky blue Gem with a prism-shaped head with three spikes on top and claws presumably meant to suit her former job as an ice sculptor. She wears a blue shirt with elbow-length sleeves as well as puffy dark blue shorts, a light blue scarf, and a pair of blue knee-length boots with dark blue spots on them.

In her corrupted form, it is a bulky body of blue ice with a height towering the Crystal Gem Garnet. It also possesses two, very large arms with four spiky fingers each and a gaping, dark mouth ziplined with sharp teeth.

The Crystal Gems are shown fighting this monster in a large cavern inside a snowy mountain. This monster is shown to be preventing them from acquiring a powerful, elemental artifact called the Shooting Star.

After its arm falls off, Garnet deals the final blow on it, thus, defeating the monster. Pearl bubbles its gem and transports it back to the Burning Room.

Its gem is seen again when Garnet bubbles Steven to The Burning Room and is later seen again when Steven bubbles the Centipeetle Mother's gemstone to the room along with the "Chaaaaps".

It was later healed along with the rest of the corrupted gems. 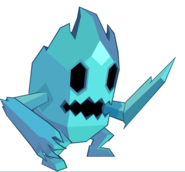 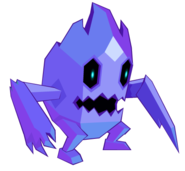 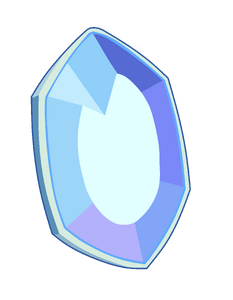 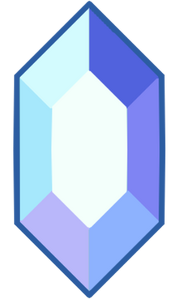 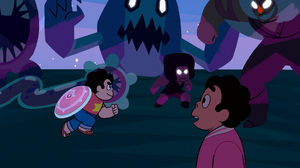