Tofreeze the world so she can have a giant rink.

Solina Hahiki, better known by her moniker Ice Solina, is an African-Hawaiian woman who was in "Evil Ice Skater". She desired to be a world famous ice skater. However as her homeland did not have cold weather let alone ice rinks, she had to teach herself to skate which garnered less than exemplary results. She wanted revenge after her sub-standard skating routine was ignored, and kidnapped various skaters to keep for herself while freezing the world over.

Her scheme is similar to Dr. Gelee, who also wanted to initiate rapid global cooling and freeze the Earth. However, hers was accidental as she did not understand the science behind her temperature machine. She is also responsible for kidnapping most of the figure skaters around the world.

When she captures the girls, she tries to trap them on ice but they manage to get free. She also uses her temperature machine to put them in frozen solid ice as she escapes while being tripped and unbalanced when her rockets from her weathered ice skates has been activated. The girls including the figure skaters that she abducted manage to break free from being frozen solid with the help of Alex's nail that her father gave her earlier to create sound waves.

Clover states that they spare her from public humiliation for being a awful skater as Solina replies that nobody upstages her as she activates her rockets from her weathered ice skates towards them by making a snow blizzard. However, her rocket ice skates begins to lose it's batteries which makes her stop the snow blizzard and becomes tripped on ice. Clover discovers that Ice-Solina is in fact a bad skater who wanted to become a skating star this make the girls to take advantage against her as Ice-Solina is losing her balance when her rocket from her weathered ice skates is still active on her heels. The girls then corners her to make a tornado spin in a rink as Elvis Boy-Go aids them and Clover begins to have a crush on him. They manage to make a broken thin ice at Ice-Solina as the latter does not given up and she attempts to escape as she flies with her rocket from her weathered ice skates. The girls manage to defeat her by throwing blades from their ice skates and her rockets from her rocket from her weathered ice skates has been cut off making her fall to where she was attempting to escape in a broken thin ice. Ice-Solina beg them to save her knowing that she can't swim once the ice breaks as Clover snobbishly states to her. "You can't swim, you can't skate? Did ever occur you that maybe athletics isn't for you?" Clover then skates to save Ice-Solina from being break on a thin ice in a spinning fashion. Sam tells her to turn off her weathered ice skates as she replies that she can't knowing that her temperature machine is still active even her ice skates are been destroyed by them. Clover and Elvis Boy-Go team up to make Clover to stop the weathered machine as she kicks using the blades from her ice skates to cut the blimp of the weathered machine and Clover falls to the edge and Elvis Boy-Go catches her in time as the weathered machine explodes on the ground. Ice-Solina is later arrested by Jerry and his men in their WOOHP helicopters while Clover sadly goodbye to Elvis Boy-Go and the other figure skaters due to Alex being attending to her father's lecture and the weather returns to normal as the beach in Malibu who were frozen in ice is now back to normal state. 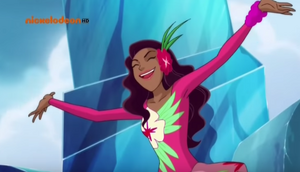 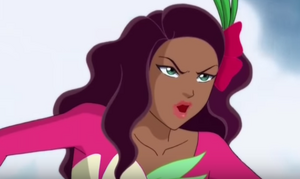 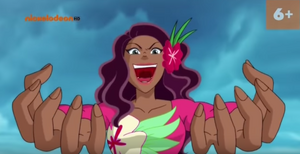 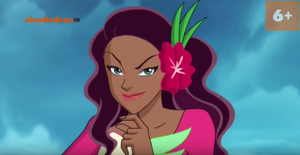 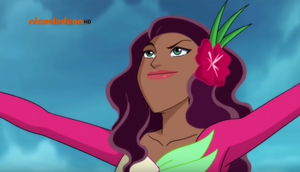 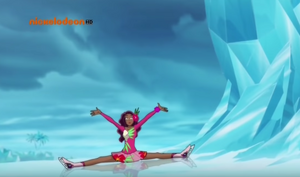 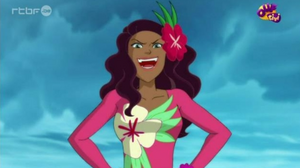 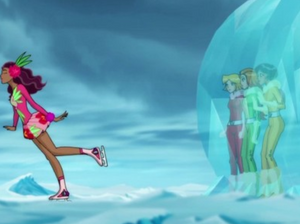 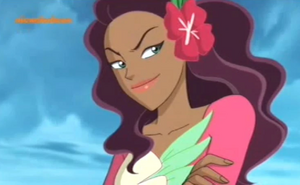 Retrieved from "https://villains.fandom.com/wiki/Ice_Solina?oldid=3501058"
Community content is available under CC-BY-SA unless otherwise noted.