Dragon of Fire and Ice

Flight (as a dragon)

Take over the world as the strongest being (failed).

2 centuries ago, she was an extremely powerful witch who could take the form of a dragon. She is believed to have been sealed away in the Sealed Fountain, but the truth as told by Gana (now exclusively known as the Grand Master of Witches) is quite different.

She was voiced by Rei Igarashi in the Japanese version and Alison James in the English version.

The Ice Witch appeared in Blizzard Forest as the Dragon of Fire and Ice, freezing the land and those who opposed her in a quest to take over the world. When Gana and her companions reached Blizzard Castle, she possessed Gana's young sister, Hanamomo, after stabbing the girl with a thick icicle that would kill the one stabbed if it was removed.

The Ice Witch took Gana's frozen companions named Kunetke and Tole hostage, eating Gana by coercion in an attempt to absorb the magic of the most powerful witch serving the grand master. After Hanamomo woke up an unfrozen Tole, she possessed Hanamomo again in an attempt to stab Tole in the back. She was then immobilized by Gana from the inside, falling to the top of Blizzard Castle. When her dragon form vanished with a flash of lightning, she turned up in humanoid form and decided to seal Gana away as a last resort before her death at Hanamomo's hands.

The Ice Witch first appeared as a long and thin dragon with pale blue skin, small bat-like wings, and red scleras. In humanoid form, she was a giant woman with high cheekbones. She retained her skin color, but her eyes became red with normal scleras. She wore a pointed hat and a long tight dress, both of the same color as her skin. 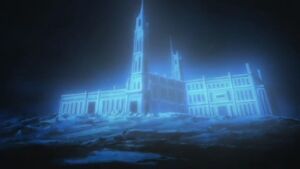 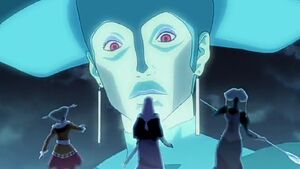 Ice Witch reveals herself before Gana and co. 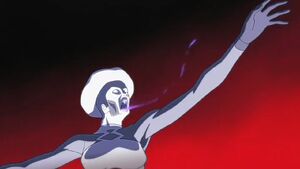 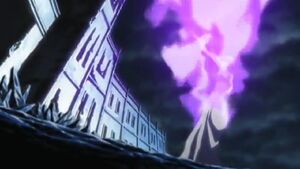