Transform the Zenkaiger's dimension into a world of ice.

The Ice World made his first appearance alongside Barashitara as he began freezing the town with this new ability that he acquired thanks to the Tojiru Gear. The team then arrived to stop this robot from freezing the populace, but due to frozen area, they began to slid all over the place, making this battle impossible to beat. With this, he left the scene to continue making some more of this wintery wonderland as the team began to slide all over place and Barashitara accidentally bumped into them. Now here's the catch if they don't defeat the Ice World anytime soon he might as well begin a new ice age.

A while later, the Ice World was down at the docks as he began freezing the ocean solid until the team showed up to stop them, and if they don't then the whole dimension will be nothing but an ice age. Thankfully, Magine decided to join the team as the battle begins first they used #38 gear to plow through the Kudakks on the icy ocean and then with some magic they got from Magine, the entire team became unable to slip on the ice.

As they fought, the Ice World head on the Ice World then decides to fight Magine personally, but thanks to her magic, he got easily confused to which magic cup she was hiding in as she'd sneaks attack him. After that, he was then destroyed by Zenkai Buster Finish and due to this, everything that was frozen in the town melted away.

The Ice World is much like the Mushroom World, particularly in his arrogance factor. The main difference is that rather than mushrooms, Ice World makes extensive usage of ice puns. 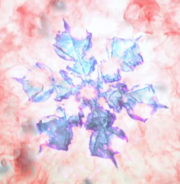