New Sorrowful Knight Icerondo is the new general in the Deboth Army created to replace Aigaron and a supporting antagonist in Zyuden Sentai Kyoryuger.

He is voiced by Ryota Takeuchi, who would later voice Jasley Donomikals in Mobile Suit Gundam IRON-BLOODED ORPHANS.

When Icerondo first appears, he displayed himself in a black-hooded cloak. He first attempts to take Souji's father for his sorrow, but is defeated. He and Killborero work together, kidnapping people for their sorrow and joy. They create a musical record of the victims' emotions and use the record to revive Deboth.

After Aigaron finds out Deboth's plan to kill Candelilla, Aigaron flees to warn her and Icerondo follows. Icerondo finds the former commanders and tells Aigaron that he died when he exploded, but because his armor was so tough, he never passed on and Chaos revived him. Icerondo tries to kill Candelilla, but Aigaron takes the hit, mortally wounding him. The Kyoryugers fight Icerondo, but in the end, Ian uses Aigaron's axe which breaks through the knight's defenses, killing the Sorrowful Knight.

In battle, he uses the Shiver Sheet Music and the Despair Baton for sound-based attacks including the Explosive Musical Notes attack with Killborero or by himself. 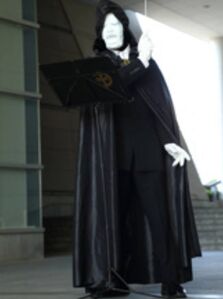