Protect Akutagawa with her life.

Get recognition from Akutagawa.

Ichiyō Higuchi (In Japanese: 樋口 一葉, Higuchi Ichiyō) is a minor member of the Port Mafia in Bungou Stray Dogs. She is named after the Japanese author with the same name.

Higuchi is an obedient and humble combatant. She has no qualms about killing people as long as she is executing her orders and will sometimes be a bit too bloodthirsty, as shown when she fired at a target she was supposed to take alive. Higuchi also seems to be easily shaken by her own failures, often dwelling on the mistakes she makes mid-combat and impeding her ability further.

She is extremely loyal to Akutagawa, who is also her obsessive love interest, and will protect him with her life, despite the mistreatment she often gets from him.

Not much is known about Higuchi's past. She seems to be a recent member of the Port Mafia as Dazai did not recognize her. It is known that she lives with her sister.

She was assigned to be Ryuunosuke Akutagawa's bodyguard and has been desperately trying to assist him, but Akutagawa's control freak nature prevented her from being able to assist him in most cases. Akutagawa preferred to do things alone, often considering Higuchi a nuisance. To make things worse, Higuchi had a crush on Akutagawa and desperately wanted to be recognized by him, driving her into an obsession with her performance.

Her first appearance was during a mission assigned to the mafia's guerrilla task force where she was supposed to corner an Armed Detective Agency group and keep them pinned long enough for Akutagawa Ryuunosuke to show up and capture Atsushi Nakajima for the bounty. It started off by Higuchi pretending to have a case for the Armed Detective Agency that involved smugglers, and she would mislead the detectives into an alleyway.

Higuchi opens fire at them once she leads them into a dead-end alleyway which angered Akutagawa once he showed up. The mission ultimately fails because Dazai bugged her out of suspicion when she was giving the ADA her faux case. Before withdrawing from battle, she makes an arrogant remark that the Port Mafia would crush the ADA.

Soon after, she is seen ordering the Black Lizard faction of the mafia to raid the ADA to cross them off the list of threats. The raid fails miserably.

Her next appearance is not until a while later after Akutagawa is badly wounded in a fight with Atsushi. She rescues Akutagawa from the water and brings him into the care of the port mafia. The defeat of Akutagawa is the third failed mission to claim Atsushi associated with Higuchi, giving her a bad reputation. She is brought to meet the boss, Ougai Mori, and he questions whether being a member of the port mafia is "fit" for her.

Already insecure about her position in the Port Mafia, she is then confronted by the black lizard leaders, Ryurou Hirotsu, Gin Akutagawa, and Michizou Tachihara, all of whom were lead by Akugatawa. Since Akutagawa was in comatose, the line of command goes to Higuchi. The three Black Lizard members warn Higuchi that they only accepted Ryuunosuke's authority out of fear and respect, a trait that Higuchi doesn't have. They no longer had any reason to follow Higuchi's orders until she earned their respect and they outright say it might be safest for her to leave the port mafia because other members want her head.

She spends the rest of the afternoon in a state of misery thinking her position through. However, she was interrupted by a phone call that Akutagawa was abducted by an enemy organization with a grudge. Rushing back to work, she plans to go completely rogue and disobey Port Mafia orders to bring back Akutagawa herself, reasoning that the Mafia would just let Akutagawa die as to not start a massive war with the enemy organization. The Black Lizard warns her that it's suicide, but she goes through anyway.

Being outgunned miserably without a power, she actually faired decently for a while during the raid on the enemy organization. Inevitably, she was overwhelmed, however. Shot in the leg and outnumbered, she would have almost certainly died, but to her surprise, the Black Lizard shows up to save her. They say it was simply their duty to save their superior but indications seemed to point towards Higuchi having gained their respect with her resolve.

The emotional roller coaster of a day that seemed to be her turning point ended when she finally saved Ryuunosuke, in which he gives her his first "thanks".

Higuchi makes up for her lack of a special ability through her proficiency with pistols and submachine guns. She has been shown to take out large groups of people alone with just firearms, often duel-wielding. 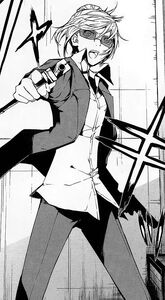 Higuchi with her combat glasses
Add a photo to this gallery
Retrieved from "https://villains.fandom.com/wiki/Ichiyo_Higuchi?oldid=3537476"
Community content is available under CC-BY-SA unless otherwise noted.