Powerful member and leader of the Old Ones

Being worshiped by inhabitants of each world he and the Old Ones conquered.

Invade and take over Earth.

Ichthultu's appearance is that of a giant green squid with large bright yellow eyes and serpentine tentacles that has eyes attached to them.

Eons ago, Ichthultu and the Old Ones terrorized the universe. Each planet they conquered, they convinced or forced the native inhabitants to worship them. Apparently, Ichthultu was once worshipped by the Thanagarians until they rejected him, as well as religion outright, having grown tired of his constant demands for sacrifice. Soon, Ichthultu set his eyes towards Earth, starting with Atlantis. King Poseidon used all of Earth's mystical energy to forge a trident to banish the Old Ones from Earth.

Thousands of year later, Ichthultu prepared for his return. Doctor Fate, Aquaman, and Solomon Grundy began a ritual to hinder his efforts. But the Justice League's interference disrupted the ceremony, allowing Ichthultu to temporarily materialize. Doctor Fate and Hawkgirl managed to seal the rift, preventing Icthultu from coming to Earth. With little choice, the Justice League went to Icthultu's home dimension known as Relex to stop him.

Ichthultu was apparently destroyed by the joint efforts of Hawkgirl and Solomon Grundy by destroying his brain while his fellow Old Ones forcibly retreated back to their homeworld. Even if Ichthultu survived, he was likely left powerless and brain-dead for eternity. Solomon Grundy did not survive the battle but before he died, he and Hawkgirl became friends. 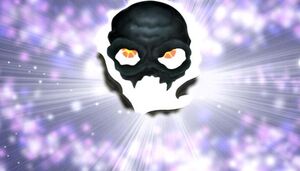 An avatar of the Great Ichtultu (Ichtultu) as he seeks to enter the Earth's dimension.
Add a photo to this gallery

Retrieved from "https://villains.fandom.com/wiki/Ichthultu?oldid=3963073"
Community content is available under CC-BY-SA unless otherwise noted.