The Icon of Sin

Unleash a swarm of demons to kill Doomguy.

Grow in strength until the entire universe has been consumed by Hell (both failed).

In Doom II, the Icon of Sin is a gigantic, grotesque head of a demon embedded on a wall. Its forehead is open, exposing its brain. The eyes are white without pupils. Even though the Icon of Sin talks, its mouth doesn't move. The Icon of Sin appears as a massive, goat-like bio-mechanical head on a wall, with a surgically exposed brain that allows it to spawn endless scores of demons. Although only its head is visible, the endgame text indicates that the entity has a gigantic body as well.

In Doom II, the boss is not referred to by any specific name. The Doom II Official Guide refers to it as the "Dark One". It is known in the Final Doom manual introductory story as Baphomet.

The Icon of Sin unleashes an endless amount of monsters except for Cyberdemons, Spider Masterminds, and zombies. The Icon of Sin will launch a cube towards the surface next to the player. When the cube hits the surface, it spawns into a random monster. The boss will launch another cube whether or not the player is still fighting the current monster. This means the player can fight a multitude of enemies at once. When defeated, the Icon of Sin starts exploding; the ending narration states that its body heaves and begins trashing Hell with flailing limbs, while all of its spawned monsters start disintegrating.

The demon makes a reappearance in the Final Doom follow-up games The Plutonia Experiment (known as the Gatekeeper) and TNT: Evilution, once again as the final boss in both games. The boss fight itself is largely identical, with only the arena changing.

The final boss is not an actual monster in the technical sense, since it does not count towards the monster kills percentage at the end of a level, and is not affected by the command line parameters that affect standard monsters. In technical terms, the final boss is a textured wall with two game entities known as "things" hidden behind it. The first is an invisible monster spawner that unleashes spinning cubes, and the second is a picture of game designer John Romero's severed head on a pike. Attacking John Romero's head kills the final boss.

The Icon of Sin makes a minor appearance in the 2016 reboot of the Doom franchise as a dormant demonic entity found within the depths of the Necropolis. Tablets in Argent D'Nur describes it as a weapon of infernal mass destruction which is "brought upon the heathens" of other worlds after their defenses have fallen to the forces of Hell, with "swift and merciless" vengeance, and having a role in the fall of Argent D'Nur that is briefly detailed.

There is also a small easter egg relating to it as well. Shooting the Icon of Sin in the forehead will make it say its classic line from Doom II, and then shoot a cube that holds a Doomguy figurine.

The Icon of Sin returns as the final boss of Doom Eternal. The Icon was the son of the Night Sentinel Commander known as the Betrayer, who lost him in a battle against the demons. The Betrayer made a pact with the Hell Priest Deag Grav, who had him lead the forces of Hell to revive his son. Instead of giving back his son as promised, the son was damned to be resurrected in the form of the Icon, and Argent D'Nur was crushed and absorbed into Hell afterward. The son's soul is said to be bound only to its former humanity by his disembodied, still-beating heart, which ties connected to the Titan.

Informed of Khan Maykr's plans to revive the Icon of Sin by Samuel Hayden to consume Earth (and if the resulting black hole is left unchecked, the universe), Doomguy sets off to Urdak to stop the ritual the Maykrs are planning to control the beast once awakened. Once he destroys the heart of the Betrayer's son and frees his soul, all control over the Icon of Sin is lost, and the Titan travels to Earth via portal, rampaging the city it arrived at. After killing Khan Maykr and returning to Earth, Doomguy battles the Icon of Sin atop a ruined skyscraper.

In the first phase of the fight, the Icon of Sin is guarded by a suit of Maykr-designed armor that must be destroyed to get to its flesh. There are eight sections to this armor plating, which each of the sections being divided to one on its head and stomach and two on its arms and chest. After these are destroyed, the body parts become invulnerable for the rest of the phase. The Icon's movements also become faster and more aggressive as its parts are broken, so the smaller parts that move around more frequently should be targeted early before they become more difficult targets. The arena is also littered with items to help the player, such as ammo, healing items, and charges for the Blood Punch and Crucible to deal with the monsters it summons. For attacks the Icon of Sin directly delivers, it can punch and slam into the player for extreme damage, shoot fireballs from its head, spray fire from its hands, electrify some parts of the arena, and fire a somewhat heat-seeking blast of energy from its head. Once all of its armor is destroyed, it calls down a meteor shower before fleeing. The player must follow it through a portal to a new arena to continue the fight.

The second phase of the fight moves to a different building and remains similar to the first phase, with the goal now to destroy the exposed body of the beast in the same spots the armor was. The demons that spawn are more dangerous than the first phase's roster, and the Icon of Sin can not only angle its attacks by moving across the arena, but it can also use two new attacks (summoning meteors to rain down that leave rings of flame where they land and fire a beam of energy from its head) as well as its previous attacks.

Once the player defeats the Icon of Sin, the Icon of Sin collapses from the battle, and the Doomguy jumps on it to deliver a fatal Crucible stab to its exposed brain, breaking off the blade to finish off the beast. 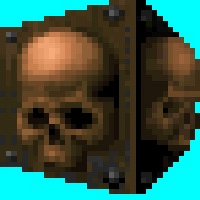 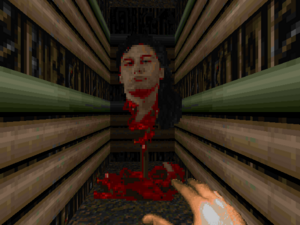 John Romero's head hidden inside the Icon of Sin. 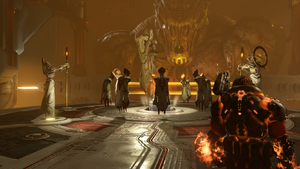 The Maykrs attempting to control the Icon of Sin. 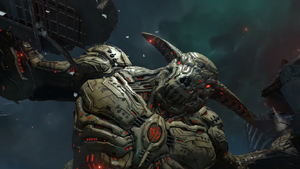 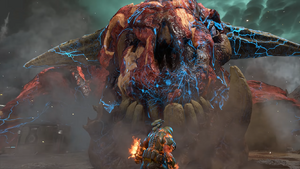 The Icon of Sin's demise after Doomguy stabs the Crucible into its brain. 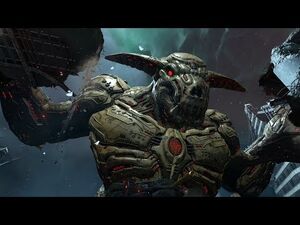