Visit Earth to cause senseless destruction and headaches for the heroes.

Ignignokt and Err, better known as the Mooninites, are the main antagonists (aside from Dr. Weird) of the Adult Swim's animated TV series Aqua Teen Hunger Force. They are two-dimensional video-game sprite-like aliens from the Moon who visit Earth frequently to cause senseless destruction and chaos for the heroes.

The Mooninites are thrill-seeking tricksters who come down to Earth and try to rob the Aqua Teens and others associated with them. Being somewhat dimwitted themselves, they have the advantage of coming up with outrageous schemes that are able to trick the feebly-minded Master Shake, Meatwad, and Carl. They are typically guilty of theft and vandalism, but other times they go so far as to kill and tortured their enemies to get their way.

In one of the season finales, the duo organized an organization of past villains to get revenge on the aqua teens. They were very unsuccessful, only showing up for a duel at the end of the episode. Being as selfish as they are, they were very cruel to their colleagues. Their organization was known as Monday, Tuesday, Wednesday, Thursday, Friday, Saturday, Sunday. This title was thought of by Rabbot.

In one season, there was a saga of clips that would play at the very beginning of every episode about a prank war that they and the Plutonians had gotten themselves into while flying through space. As you may imagine, this ended up backfiring for both sides, resulting in both ships being destroyed.

In the movie, they were one of the few characters that did absolutely nothing to try and stop the invasion of the giant workout robots. Rather they stayed in character, robbing homes and trying to sell stolen property. In this movie, it was revealed that they were somehow related to Dr. Weird and the hunger force (his father being the Watermelon.

They appear to be blocky 2D retro characters from old video games. Ignignokt is big and green while Err is small and pink.

Ignignokt, the leader, is lime green and is larger than his companion named Err. Ignignokt usually is the one to come up with the Mooninites' plans. Err is his hyperactive and trash-talking tag-along. He often yells profanity to get his point across and usually agrees with anything Ignignokt says. Err has actually, however, sometimes shown he is the more intelligent of the two, despite his follower status.

Retro Laser Guns - both of the Mooninites possess 2D laser guns that shoot tiny orange squares that move comedically slow. When they stack each other on top of one another, they are able to shoot a giant pellet (which also moves at the same speed).

Illusiveness - being two dimensional, they have the ability to turn sideways and give the illusion of invisibility. 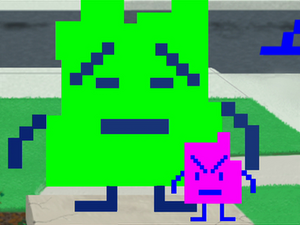 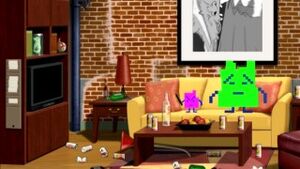 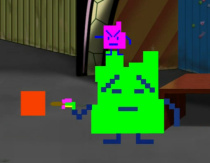 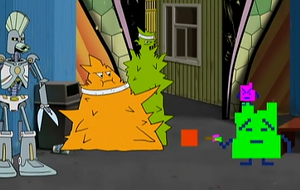 The Mooninites attempting to rob the Plutonians and the Cybernetic Ghost of Christmas Past from the Future. 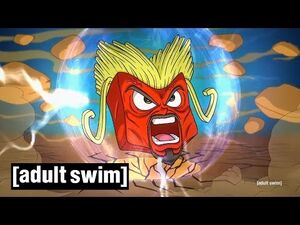 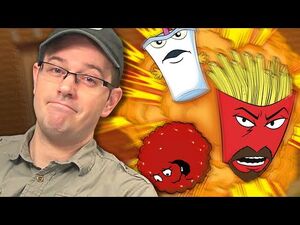