Assisting Dr. Gruselglatz in his plans

Henchman
Igor is one of the most recurring antagonists in the Austrian TV show Die heiße Spur, even reappearring after it has been renamed into Tom Turbo. He also appears in a few Tom Turbo-books.

He is the assistant of Dr. Gruselglatz and is rarely seen without him.

In one episode, where Tom investigates the appearance of a creature named The Black Swan in a ballet theatre, it's revealed that he's Igor who, under his pseudonym, ordered a super glue from him, planning to play such a terrible prank on him that Dr. Gruselglatz would never say his nickname again. When Dr. gruselglatz angrily calls him by that name again, Igor uses the glue, gluing his boss to the stage, forcing to participate in the ballet show that evening.

Another time, Igor disguises himself wearing a lab coat over his head and a wig on top, making him appear headless. Under the name of "Dr. Schrumpf" (Dr. Shrink (in terms of shrinking)) he offers Fürst Finster a machine that turns things into stone. Fürst Finster plans to use it to turn Vienna into stone so he can buy it with ease. After Tom tracked him down to Fürst Finster's castle, he revealed the scientist's true identity and asked him why he disguised himself. Igor admitted that he didn't want to be the stupid assistant anymore. Fearing what might happen if Dr. Gruselglatz finds out, he takes a stone object that is essential for the machine and tries to run, but Tom puts an antenna in his way, causing him to fall. Tom takes the object with him, leaving Igor at the mercy of a raging Fürst Finster, whom Igor comments to be even worse than Dr. Gruselglatz when it comes to being angry.

When the show was renamed into Tom Turbo, Igor continued working with Dr. Gruselglatz, but eventually he was replaced with a new female assistant called Fiffi. Igor and Fiffi never met on-screen, neither it is mentioned what happened to him.

Igor was somewhat childish, his favourite hobby being eating gummy bears. In one episode, he is shown dancing to music while Dr. Gruselglatz is away. Unlike his boss, Igor is easily scared and in one episode, even runs away when he believes to have heard a mouse, while it's actually Tom.

Igor hates the nickname he got from Dr. Gruselglatz, as mentioned above he once even tries to play a prank on his boss to make him stop. He is also mistreated in several episodes, as Dr. Gruselglatz often tests the new chemicals he invented on him or blames him everytime something fails. 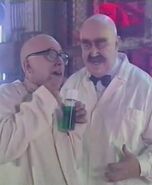 Dr. Gruselglatz and Igor as they appear in the book.