Transformers: Dark Of The Moon

Pet of the Villain

Igor is a supporting antagonist of the 2011 film Transformers: Dark of the Moon. He is a Decepticon who served Megatron.

He was voiced by Greg Berg.

Igor is a deformed Minicon (a mini species of Transformers, usually found in the service of the Decepticons) and he is about two feet tall. He has an ugly steel face with red eyes. He has a rounded olive green body, and has a hideous metal hump on his back. His arms mismatched (one is big and one is small), and he moves with the assistance of a makeshift cane.

Igor has no uses, but Megatron values him as a companion he can turn to, someone who can listen to his troubles.

Igor is a scavenger who sticks with Megatron because of ample amount of scraps he feeds him. Megatron let him be his pet so that he would be able to forget his troubles every once and a while. Igor loves Megatron, and would not know what to do without him.

Igor first appears in Megatron's camp. Megatron greets him and feeds him before more Decepticons showed up. Igor appears later in the movie at the Lincoln Memorial. He followed Megatron and Starscream up the stairs, where Megatron shot Abe Lincoln off his throne. Igor then proceeded to eat Abe Lincoln's head.

It is unknown what happened to Igor after the Battle of Chicago. In the comic adaptations, he is last seen staring at the sky, being sad and confused as he wonders what has become of his master. 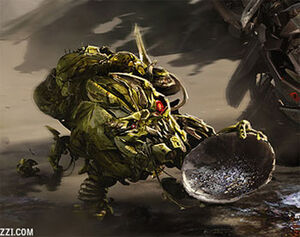 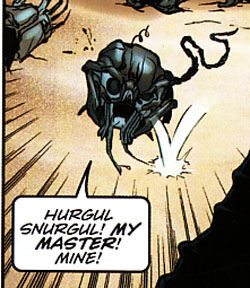 Igor as seen in the comic adaptation.
Add a photo to this gallery

Retrieved from "https://villains.fandom.com/wiki/Igor_(Transformers_Film_Series)?oldid=3703159"
Community content is available under CC-BY-SA unless otherwise noted.