Has all of Curt Connors' memories and the Lizard's powers with none of Curt's humanity.

Can hypnotize humans and scale walls.
Can command other reptiles.
Uses his claws and prehensile tail as weapons.
Bulletproof skin.

Supervillain
Iguana is a supervillain in the Marvel Comics universe and an enemy of Spider-Man.

He was defeated when Spider-Man used a portable Enervator to increase his power while decreasing the Lizards. With his power over increased it seemed as if the Iguana exploded but in reality he was transformed back into his original form.

Iguana somehow resurfaced years later. In the reptile house of the Central Park Zoo, Spider-Man fought Iguana and various crocodiles. Iguana tried to hypnotize Spider-Man but his special lenses didn't allow it. He then tackled Spider-Man out of the reptile house and Peter got a call from his Aunt May. May told Peter she hadn't seen him in days and asked him if he and Anna Maria Marconi were coming to dinner, making him realize she still thought they were dating. Peter then got a call from Anna much to Iguana's annoyance. Despite the call, Spider-Man managed to defeat Iguana and webbed him up.

Of all the cross-species to come out of Oscorp, only Iguana was never claimed as a creation of any of the company’s scientists. That’s because its true creator, Curt Connors himself, had no idea that one of his own former experiments would evolve to its current fearsome form. Connors’ go-to lab animal, an iguana he referred to as “Iggy,” had weathered so many odd experiments over the past few months, it was a wonder the small reptile was still alive. Somewhere along the way, Connors had injected Iggy with a formula that appeared to have no effect at all. And it did not – at least not in and of itself. What this particular injection did manage, however, was to serve as a catalyst that slowly warped and mutated intended effects of other experiments upon the animal for months to come. Shortly after Connors became the Lizard, Iguana revealed himself within the walls of Oscorp in all his seven-foot glory. As it turns out, after gestating for months, all of the strange science going on inside Iggy’s body had come to a head in the course of a couple hours, morphing him into the remarkable being terrorizing Manhattan today.

When Peter Parker snuck into Oscorp, with the help of Gwen Stacy, Iguana was unconscious in a pod-like device. When Scorpion detected Peter's radioactive blood and broke out with the other cross-species, Iguana escaped.

Iguana was spotted in Central Park by a few news teams, where he was initially mistaken for his creator, Doctor Connors, in his Lizard persona. Spider Man arrived on scene to contain Iguana, but he was quickly scared off by the first in the Spider Slayer Series. Due to the S-Bot's massive size, Spider Man couldn't give chase.

At some point, Spider-Man went to rescue Henry Harper, the District Attorney, who had been kidnapped by a small gang and taken into the sewers. When Spider-Man confronted a member of the gang, he was informed that a creature with a "tail like an iguana". Spider-Man soon confronted Iguana, who was seemingly attempting to eat the DA. Spider-Man fought Iguana, along with a group of citizens infected with the cross-species virus, and very quickly defeated the beast and saved the DA. 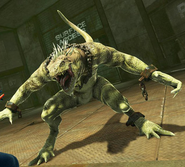 Iguana about to fight Spider-Man