Iguanus is a minor antagonist in the Transformers franchise, especially Generation One. The original version of the character was based on a figure from the 1988 toyline.

Like the rest of the original Pretenders, Iguanus debuted in Issue #40, in which Scorponok had six of his crew undergo the Pretender process, being fitted with Pretender shells that made them resemble giant monsters. Their first assignment was to attack a computer research centre but they found their way blocked by the new Autobot Pretenders, being directed by Optimus Prime whose personality was stored on a computer disc, and the Decepticons were soon driven off.

After a few other minor appearances alongside the other Pretenders, including an attempt to steal oil from an off shore rig, Iguanus made his most prominent appearance in Issue #54 where he was key to Scorponok's plan to create a thunderstorm over New York and then harness its power. During the briefing, he taunted Skullgrin, calling him a "fleshling lover". Iguanus' role was to climb to the top of the Empire States Building and plant the electrostator which would attract the power of the storm, absorbing it and destroying half the city in the process. Before leaving on the mission, Iguanus argued with Skullgrin over whether they should kill the human reporter Cecilia Santiago. They were interrupted by the Autobot Race Car and Off Road Patrols and Iguanus fled to New York to carry out his task. He nearly succeeded but Roadhandler knocked the electrostator off its position. Iguanus caught it but as a result he was hit while the full force of the lightning strike, dissipating it, and crashed to the street below, apparently destroyed.

Despite this, he reappeared among Scorponok's troops in the next story arc, accompanying him to break up a confrontation between the Autobots and the Air Strike Patrol and getting caught up in Megatron's attempt to take over the Earth Decepticons. Later, Iguanus and the other Earth-based Transformers were transported to Cybertron to help defend it from Unicron. He was last seen in the early stages of the battle so may have been among the casualties. 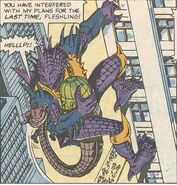