Villains Wiki
Register
Don't have an account?
Sign In
Advertisement
in: Spoilers, Mature, Kimetsu No Yaiba Villains,
and 26 more

Obanai Iguro (the only male member)

Appease the Snake Demon by offering her child sacrifices.

Gather and maintain evermore wealth from the Snake Demon's victims.
Keep Obanai locked in the cage so he can be offered as a sacrifice to the Snake Demon (failed).

The Iguro Family are one of the flashback antagonists of Demon Slayer: Kimetsu no Yaiba. They were the wicked relatives of Obanai Iguro, the Serpent Hashira of the Demon Slayer Corps.

The Iguro Family are an opportunistic, abusive and rotten family full of only women that worshipped the Snake Demon. Some time ago, Snake Demon and Iguro family members made a pact: the demon would kill people, rob their wealths and give them to the family. The family in return, produce babies and offer babies they give birth to the demon (Snake Demon was a picky man-eater fed only on human infants.) as sacrifices. Under this agreement Iguro family managed to gather immense amount of wealths.

When Obanai Iguro, who is the first male in the family to be born over 370 years, The family confines him to a jail cell when he grew to be a boy and offering him a bunch of food every single day to fatten him. The jail where Obanai was imprisoned had no ventilation and the smells coming from foods stayed in the jail, making Obanai constantly feel sick. Iguro Family did this to him not out of love, but to sacrifice him to the Snake Demon. In other words they raised Obanai not as a human being, but as a sacrificial pig - in fact they comforted Obanai as if pet owners soothing their pets.

Then one day, family members brought Obanai before the Snake Demon, and here it was revealed that Obanai was born as a male and had heterochromia. The Snake Demon thought Obanai was such an unusual and rare offering, it would be a waste to eat him immediately after his birth. The demon decides to hold off on her scheme to eat him until Obanai is grown bigger - hence he was not eaten as a baby like others before him. But to satiate her demonic urge to feed, the demon ordered Iguro family to rip Obanai's mouth so she can drink blood coming out of his mouth, the order which the family eagerly complied, much to Obanai's unimaginable suffering. After the mutilation Obanai's mouth looked like the Snake Demon.

Realizing that he is living only on a borrowed time, Obanai planned his escape from imprisonment and with careful preparation and superhuman determination, Obanai succeeds in breaking out of his confinement. But Obanai didn't get far, as the Snake Demon noticed his escape and gave a chase. Just when Obanai was about to get caught and to be eaten, he was saved by Shinjuro Rengoku, the former Flame Pillar demon slayer who easily slew the demon by chopping her to pieces. When Shinjuro took Obanai to his relative, Obanai's cousin, instead of welcoming and comforting him, shoving him violently and started berating him to no end because of his escape, the enraged Snake Demon slaughtered almost all Iguro family members (50 of them) for failing to secure her offering. She went as far as to condemning him that he as an offering should have just obediently accepted his fate and die. This behavior was too much for Shinjuro to tolerate and he eventually stepped in to stop her.

Iguro family's abuse and unjustified denunciation profoundly traumatized Obanai, causing him to close his heart on others. Even though Obanai knew what his cousin said to him was an absolute rubbish and had zero validity, he still felt guilty over their deaths because of him, and began to detest his own bloodline. From Obanai's pov, because he was born from a wretched family who became rich at the expense of others, that he too is a wretched scum. For a long time he displayed a deep mistrust towards other humans (especially towards women); the only one he ever trusted was Kaburamaru, his snake pet that befriended Obanai during his confinement. and his experience with his family made Obanai made him very anti-social and difficult to approach.

Fortunately for Obanai, upon joining Demon Slayer Corps he began gradually to change: by eradicating Demons and taking his rage born of his tragic past upon them, other people expressed gratitude for his bravery. Hearing people's praises of him killing Demons comforted his troubled soul. Furthermore Obanai found a love of his life named Mitsuri Kanroji, a fellow demon huntress who Obanai develops a crush on and eventually becomes his lover. Upon meeting Mitsuri, Obanai's mistrust towards women is partially healed. With Mitsuri he learned to eat foods with greases (greasy foods make him retch due to his past). Obanai seemed to have finally been freed from his family's abusive grasp.

But even with his newfound life as a demon hunter, Obanai still feels that he too is responsible for their crimes. Even after many years Obanai still feels the harsh karma his malicious family left him behind: Obanai confesses in a monologue that as a member of his family he still feels the rotten essences of his departed family members weighing on him and the sin of his family is so unbearably heavy that the only way to truly wash away his bad karma is to have his flesh be perished and be reincarnated. 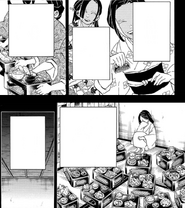 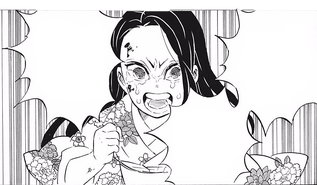