Giving magoi to all life
Taking magoi from all life

Take all magoi from all life on Earth destroying it.

Supreme Being
Ill Ilah is the god that Al-Thamen worship, and the overarching antagonist of the anime and manga Magi. It was once a white entity that was responsible for the creation of life in the world of Alma Torran but after being replaced as god, it became a black entity that is renowned as the harbinger of destruction if it descends on their world.

Initially as a white creature that appeared in the sky, Ilah believed that every life form that it creates already had a destiny that it could not escape. But when Solomon took the last piece on magoi from Ilah to replace it as god, Ilah turned black. As a black creature it only desires to take back the magoi from all living creatures in Alma Torran and Earth.

According to Mother Dragon, Ilah was simply an entity of power that lacked a personality. However, it was revealed by her that David was the reason why Illah became dark. David actually merged his being with Illah and because of this it desires the destruction of the world.

As the god of Magi, Ilah has unlimited powers and can create any forms of life and can remove them at will. After Ilah turned black, it has the ability to remove the magoi from all forms of life and turn the sun black. There is absolutely no way to fight Ilah as it is invincible. The only way to stop Ilah is to stop the "medium" from making it descend on the Earth. But after the events of the Magnostadt arc, Aladdin states that if Ilah returns it will be nearly impossible to stop it as it will descend upon the Earth at a faster rate.

Ill Illah was the creator of the world where Alma Torran existed. It created many intelligent life forms on that planet. After many years, Ilah decides to chose the humans as the superiors beings and gave them magoi. Over the years David Jehoahaz Abraham has been taking magoi from Ilah to complete his plan to replace god himself which weakened Ilah. After the battle against David, Solomon and his comrades traveled to the dimensional space where Ilah lies and it told them that everyone was trapped in their own destiny that they cannot escape. After disagreeing with Ilah, Solomon decides to take the last remaining magoi from Ilah basically "killing" it and turning it black.

Having disagreed with Solomon's idea of splitting magoi among all the life forms in their world, Arba decided to betray Solomon and created Al-Thamen to bring back Ilah. After Ilah's descent on the world of Alma Torran, it took all the life from everything in their world (with the exception of Solomon, Ugo, and a large group that was protected by Solomon) leaving their world as a dark desolate wasteland. Ilah along with the members of Al-Thamen was sealed in a completely different dimension at the cost of Solomon's life.

David was seen in a form of Ill Ilah inside Ugo's fishbowl creating a universe. Ill Ilah appears once again when Sinbad summoned a very small version of it to destroy it and transform it to show his new powers to Alibaba and Aladdin. 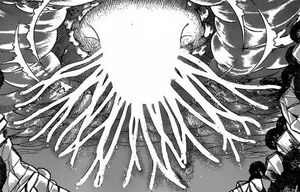 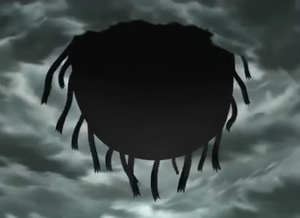 Ill Ilah in the sky 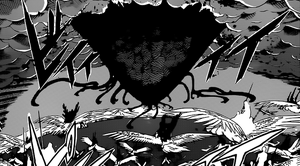 Ill Ilah about to descend 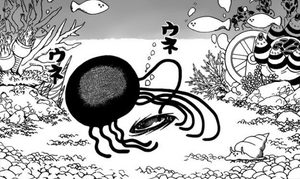 David in the form of Ill Ilah in Ugo's fishtank