Raid the village while killing all the villagers and golems and taking it over (main goal; determinant).

Kill Steve, or the player's character (side goal).
Take over the overworld under the rule of the Arch-Illager (Minecraft Dungeons).

The Illagers, also known as Evil Villagers, are the secondary antagonists of the sandbox survival video game Minecraft (starting in 1.11, but most prominent in 1.14 and updates following it). They are the hostile and territorial versions of the much more passive and benevolent villagers' and, as such, serve as their archenemies.

One of the most prevalent and organized enemies a player can face, Illagers frequently raid and takeover villages. They serve as one of the game's "mini-bosses" because of their partaking in raids towards the player and passive villagers, and possess many abilities such as axemanship, archery, magic, and many more. Evokers, Vindicators, Vexes, Pillagers, and Ravagers are the most well-known illagers in the franchise so far. They also can optionally serve as the main antagonists in certain events, mostly during an illager raid or a woodland mansion siege.

Illagers are known to be destructive, ruthless, mean, cruel and strong mobs. They are also one of the very few hostile mobs that appear during both daytime and nighttime.

Woodland Mansions are the main headquarters of the Illagers. The mansions are huge and rare structures in the game, spawning only in Dark Forest and Dark Forest Hills Biomes. In these mansions, Evokers and Vindicators can spawn. Mansions have 2-3 floors. In this mansion, there are:

Pillager Outposts are a scout tower-like structures. In these structures, there are Pillagers that holding crossbows and a Pillager Captain who carries an Illager banner. There are also Iron Golems that are imprisoned by Pillagers and put in a cage. There is a chest, tents, and scarecrows in this structure. In this structure, Pillagers will continuously spawn, and if the player kills the captain, they will get a "Bad Omen" status effect, which triggers a raid to occur in the next village visited by the player.

A Raid is an attack from the Illagers to a village. If the player enters a village while they have a Bad Omen effect, a raid will start and Illagers will come to the village and attack them. In these raids, player can gain loot like armors and emeralds from killing the raiders. If the raid ends with a fail, the player will get the "Hero of the Village" effect.

Patrols are a group of two-five Illagers. They patrol around the biome and they attack the player when they encounter them. There is a patrol captain and they carry a banner. If the captain is killed, the player will get the "Bad Omen" status effect.

The Fiery Forge is the Illagers' very own weapon forge and fortress in Minecraft Dungeons. It is also home of the Redstone Monstrosity.

The Highblock Castle is the place where the Arch-Illager and his higher ranking minions reside in Minecraft Dungeons. It is divided into three places: Highblock Halls, Underhalls, and Obsidian Pinnacle.

The Arch-Illager only appears in Minecraft Dungeons as the main antagonist of the game and the leader of the Illagers. Previously an outcast illager, he is corrupted by the Orb of Dominance and goes to the path of evil. He enslaves villagers.

Raid captains are the leaders of raids, patrols and Pillager outposts. They lead the other illagers and they handle a Illager banner named Ominous Banner on their head. A raid captain is usually a Pillager or Vindicator and rarely an Evoker. It can be a Illusioner, however they can not spawn naturally. If a raid captain is killed by a player, the player will get the Bad Omen status effect, that causes raids if the player enters a village. In Minecraft Dungeons, They are known as the Rampart Captain.

Illusioners only appear in the Java Edition. They can not naturally spawn, only via commands. Illusioners reappear in Minecraft Dungeons with a different outfit, but still retain their abilities in the base game.

Evokers appear in Woodland Mansions. They can summon Vexes and they can run very fast after they have casted a spell. They appear in the fourth round of the raid. They can also attack with their fangs. They serve as one of the mini-bosses in Minecraft Dungeons.

Vindicators also appear in Woodland Mansions with the Evokers. They attack with iron axes. They appear in the second round of the raid. They are the most common Illager in Minecraft Dungeons.

Vindicator Chef Is an variant of an Vindicator exclusive to Minecraft Dungeons. They wear an apron, a chef’s hat and attack with an Ladle.

Vexes can only be summoned by Evokers. They attack with an iron sword and can pass through blocks in the base game.

Pillagers appear in pillager outposts, raids and patrols. They attack with crossbows.

Armored Pillagers are stronger variant of Pillagers only seen in Minecraft Dungeons.

Ravagers, also known as The Illager Beast appear only in raids. They attack by head butting to enemies. They only appear in Minecraft Dungeons in the Howling Peaks DLC.

Witches are not part of the Illagers. They only raid the village with them. They attack with potions, they also defend themselves with them. In Minecraft Dungeons, they reside in the Soggy Swamp.

Johnny is a Vindicator that is named via a name tag. Johnny is the more ruthless and homicidal version of the normal Vindicator. They attack almost every mob, such as animals, utility mobs, other hostile mobs and even Ravagers, Vexes and Witches. Also, Johnny is a reference to the famous quote "Here's Johnny!" from another villain, Jack Torrance, who handles an axe like Vindicators.

Enchanters are only seen in Minecraft Dungeons. They enchant/buff allies, which makes them stronger and more powerful.

Royal Guards are heavily armored Illagers armed with a mace and a shield, exclusive to Minecraft Dungeons. They guard the Arch-Illager in the Highblock Castle.

Geomancers are elderly Illagers exclusive to Minecraft Dungeons. They are capable of summoning stone pillars and explosive pillars out of the ground.

Icologers are Illagers exclusive to Minecraft Dungeons. They are able to manipulate ice.

Windcallers are Illagers exclusive to Minecraft Dungeons. They are capable of summoning tornadoes with their staffs.

Mountaineers are illagers exclusive to Minecraft Dungeons. The are Illagers worn with a hood, face covering and attack with a pickaxe. 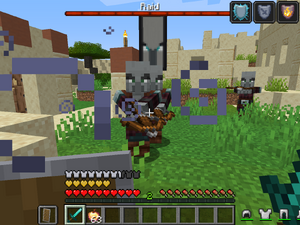 The Illagers while a raid is taking place. 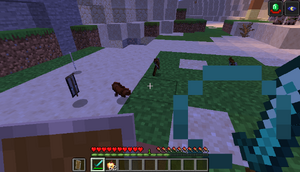 The aftermath of a Illager raid. 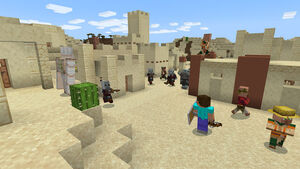 The Illagers raiding a village, as shown in a promotional image from Mojang. 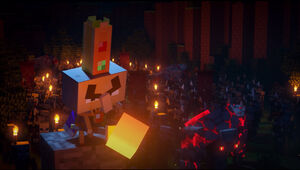 The Arch Illager with his army of Illagers and Redstone Golems as seen in Minecraft Dungeons.