Man in the Mirror:

Get revenge for Sorbet and Gelato

Illuso is a minor antagonist in JoJo's Bizarre Adventure: Golden Wind. He is a member of La Squadra Esecuzioni, a unit of Passione specialized entirely in assassinations. He is the second member of the unit encountered by Team Bucciarati, who attempts to trap and kill Giorno, Abbacchio and Fugo inside his mirror world during their visit at Pompeii when they are searching for the key for Coco Jumbo. Illuso wields the Stand known as Man in the Mirror.

Illuso and the rest of the squad were horrified at the sight of former team members Sorbet and Gelato being brutally tortured and murdered by Cioccolata. Initially aiming to seek a more active role within the organization, squad leader Risotto Nero called off their attempted blackmail after receiving Sorbet's body parts as a warning. This was all changed after they found out about the identity of Diavolo's teenage daughter, Trish Una, planning to kidnap her and use her as a bargaining chip against Diavolo.

After Narancia's battle with Formaggio, Bucciarati receives an e-mail from the Boss, ordering him to find and retrieve a hidden key in Pompeii for Coco Jumbo so that they can deliver Trish safely to her. Bucciarati dispatches Giorno, Abbacchio and Fugo to search for the key at Pompeii ruins. At Pompeii, Giorno and the rest are lurked and attacked by Illuso, who manages to successfully trap Fugo within his mirror world by using his Stand, Man in the Mirror. During the attack, Fugo sees Illuso attacking them within a nearby mirror but is unable to see him in the real world, resulting in him being caught. Before being attacked, however, he manages to shove Giorno and Abbacchio aside.

Inside the mirror world, Illuso proceeds to question and torture Fugo for Trish's location. Fugo, refusing to leak out any information, desperately calls his extremely dangerous Stand, Purple Haze, to counterattack but ends up activating it in the real world, as only Illuso's Stand is able to enter the mirror world. Meanwhile, Giorno and Abbacchio are visibly disturbed by Purple Haze's appearance as it starts to show uncontrollably violent behavior, attacking nearby walls at random. Suddenly, one of Purple Haze's capsules breaks, resulting in the flesh-eating virus to start spreading within a five meter radius, brutally killing every nearby crow in the area.

Illuso notices that Purple Haze's virus has started to affect in the outside world, but confidently brags that not even a virus can enter the mirror world unless he himself wants to. Abbacchio decides to abandon Fugo for the safety of the key but Illuso suddenly attacks him and manages to drag half of his body into the mirror world, rendering Abbacchio's Moody Blues useless. Cutting off his own hand, Abbacchio tosses the key to Giorno before being dragged in. With only Giorno left, he deliberately lets himself trapped in the mirror world as well so that he can bring one of Purple Haze's capsules within, infecting himself and Illuso as well.

Illuso cuts off his own hand and re-enters the real world, trying to escape from the radius of the virus. Unbeknownst to him, Giorno had created a snake that would enable Purple Haze to track him down. Illuso is then caught by Purple Haze and as a final move, he tries to lure it attacking a nearby mirror which would send it to the mirror world as well. This fails as Purple Haze shoots one of its capsules against the wall besides Illuso, breaking it and infecting his face. Illuso is then brutally finished by Purple Haze which pummels the virus all over his entire body before punching his face clean off and leaving Illuso gruesomely dissolving into a pile of liquefied flesh and clothes.

Although Illuso remains dead in JoJo's Bizarre Adventure: Purple Haze Feedback, it is revealed that Illuso killed Sheila E's sister, causing her to join Passione to avenge her.

Illuso's Stand, Man in the Mirror, is practically a more powerful version of J. Geil's Hanged Man, which not only attacks from reflective surfaces, but can also bring other humans and objects into the mirror world by using mirrors as portals. Illuso can actively decide whoever or whatever he wants to bring into the mirror world, thus being able to render most Stand users helpless when their Stands are left in the outside world. There exists no life forms within the mirror world other than those dragged in by Illuso himself. Unfortunately for Illuso, he can be easily tricked by having him drag unwanted substances, like Purple Haze's virus, within the mirror world which forces him to escape back to the real world. Other than being able to move freely between real and mirrored world, Man in the Mirror has also physical prowess as well, as it can throw stronger than average punches. 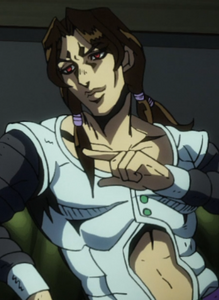 Illuso in the anime. 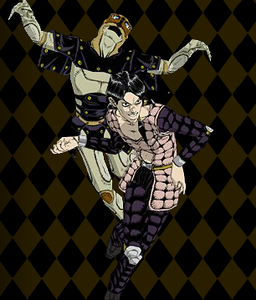 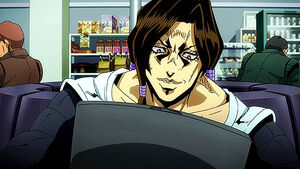 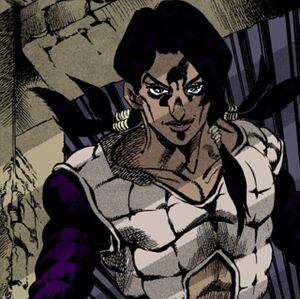 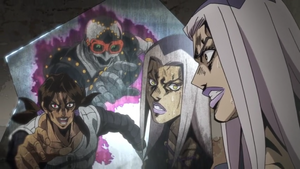 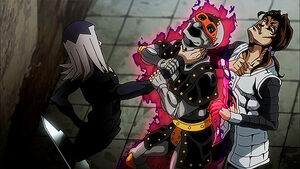 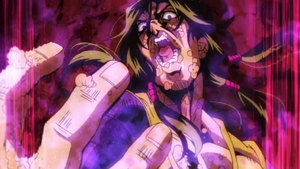 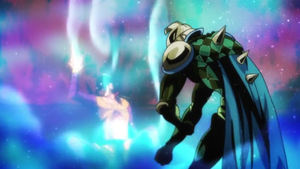 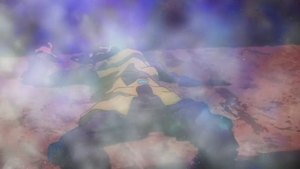 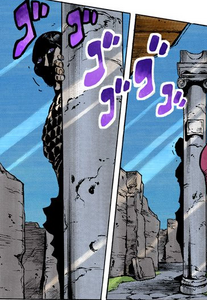 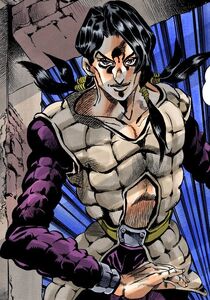 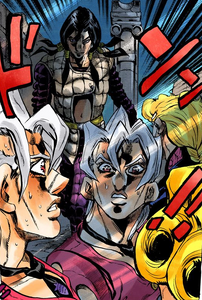 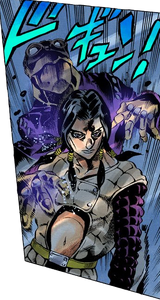 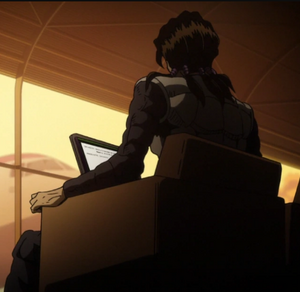 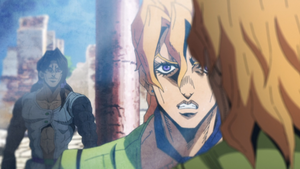 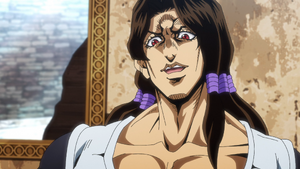 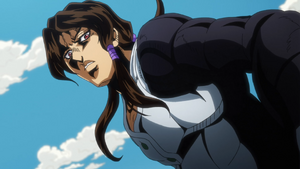 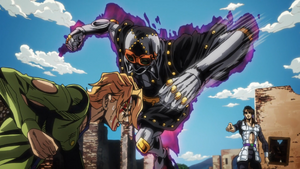 Fugo fighting Man in the Mirror. 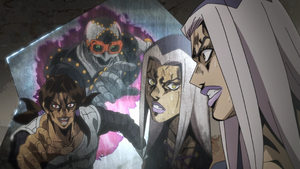 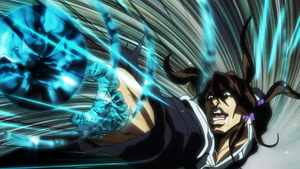 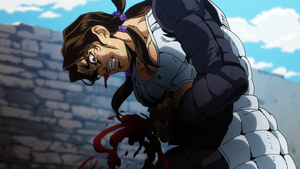 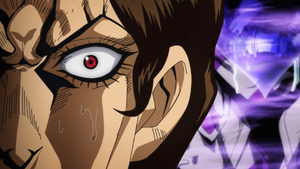 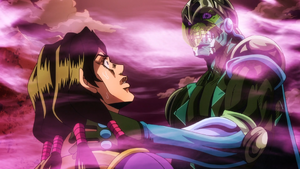 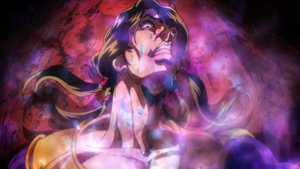 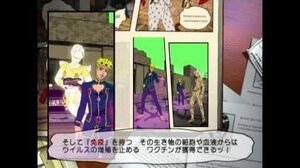 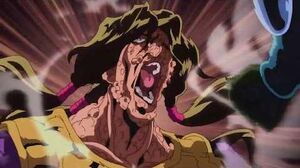 Retrieved from "https://villains.fandom.com/wiki/Illuso?oldid=3830441"
Community content is available under CC-BY-SA unless otherwise noted.