Member of the Chaos Faction

Stalking Kobayashi and the dragons (formerly).

Ilulu, is an antagonist in the Miss Kobayashi's Dragon Maid manga and the second season of its anime adaptation.

She is voiced by Tomomi Mineuchi in Japanese and Kristi Rothrock in English.

As a human, Ilulu resembles a young girl with short, tied salmon-colored hair, pink eyes and with her horns still visible. She sports an ample bosom despite her human form appearing so young. The reason for this is due to her having difficulty with transforming to some extent, and according to Tohru herself, her breasts would only grow larger if she relaxed. She also still shows her claws and tail whilst in her human form, although she has been able to transform her claws into human hands and hide her tail.

At first, Ilulu appears destructive, battle-crazed and has a simple love for destruction according to Elma. She bares a notable disdain towards humans and dragons coexisting, believing that the two races being together only causes suffering and hate. This is revealed to be due to an event in her past where she used to enjoy playing with human children but an attack that killed her parents made her believe that humans are bad and she was lead to believe that the two races should never be together. She had no qualm over putting lives in peril and desiring to destroy an entire city inhabited by humans.

Deep down however, Ilulu reveals to be truly insecure with her own beliefs and that she would rather go against them and be happy instead of continue to be swallowed by hate. Although it took a bit of convincing, Kobayashi's kindness eventually won Ilulu over. Despite this, she still refused to play with Kanna and Saikawa, not having forgiven herself for trying to destroy the city and believing she had no right to, displaying her newfound guilt in the process.

According to Lucoa, Ilulu had to change in order to fight alongside the older dragons and not be deceived by others, in a respective sense; she was forced to grow up fast. However, being treated with kindness and understanding by those around her has caused her mellow out somewhat and enjoy fun activities like she used to. This process allowed Ilulu to forgive herself and thus enjoy the time she spends with Kanna and Saikawa.

Ilulu was a dragon hailing from the Chaos Faction. When Ilulu was young, she used to love humans as well as play games with them. Unfortunately, her parents were slain by some humans, thus causing her to develop an intense hatred for mankind. Afterward, she was indoctrinated by the other Chaos Dragons into holding all of humanity in contempt as well as to discourage the idea of integrating with their culture. Despite this, she still pondered deep down that humans weren't wrong.

Ilulu first appeared following a landslide that destroyed half of the mountain, which was where Kobayashi and Tohru first met, enraging Tohru. The two soon investigate and visit other dragons they knew to find if any of them were responsible. As it turns out; Fafnir was attending to a game convention during the time, Lucoa was travelling outside of the country and Elma had heard news about it too and was equally as curious. Ilulu then appeared in the flesh and quickly instigated a fight with Tohru. Elma created a perception blocking barrier so no humans would witness the scene or interfere. Tohru however, could not fight at her full strength due to both trying to fight Ilulu and protect the city below them from the destruction of the battle.

Elma then explains that Ilulu's level in power is only slightly below that of Tohru's and that she would only fight Ilulu should Tohru be defeated. Kobayashi however, seeing the danger and possibility of Tohru's demise, promised to buy Elma as many sweets as she wanted. Elma then creates a barrier to protect the city which Kobayashi yells to Tohru that she doesn't have to hold back. Ilulu is visibly disgusted by Tohru's comingling with humans, and attempts to destroy the world with her true form. Tohru however blasts Ilulu, defeating her and sending her away through a portal.

Ilulu survives and ends up being sent to a forested area. She realises how Kobayashi managed to convince Elma to help Tohru and save the city. Ilulu becomes curious and desires to learn more about her.

Ilulu then reappears as Kobayashi is heading home from work. She questions the human as to why Tohru is living amongst her, and Kobayashi responds saying that Tohru is doing that of her own accord. The dragon then asks Kobayashi if she's not afraid of Tohru, with Kobayashi imagining her maid's smile and saying not when she's so cute. Ilulu then deduces that Kobayashi is in love with Tohru's human form (not knowing it's the other way round) and tries to seduce her with her breasts, mistaking Kobayashi for a male. The human angrily corrects that she's a woman and leaves to catch her train. Ilulu follows her however and tells Kobayashi that she can't accept them coexisting, saying that the coexisting between human and dragon causes suffering, hatred and pain.

As Ilulu talks however, Kobayashi starts falling asleep, much to her annoyance. She quickly wakes up and says that the two races can enjoy their differences and create respect and kindness for each other, bound by trust. Ilulu believes that Kobayashi is glossing over tragedies with nice words, but she corrects that even when bad things happen, she doesn't mind them being covered up. Kobayashi then continues saying that even if she doesn't know how to respond to Tohru's feelings, they still live together and manage. Kobayashi ends up falling asleep, but Ilulu believes that her seduction didn't work because Kobayashi is a woman. She then uses the last of her transformation magic to turn Kobayashi into a male, giving her a human penis in the process.

Kobayashi soon notices her sudden change and ends up feeling attraction towards Tohru, much to the human's discomfort and dismay. Kobayashi realises Ilulu is the reason for her gender change, and deduced that she was taught to hate humans by the Chaos faction. Tohru soon realises Kobayashi's concealed attraction and sneaks her a love potion through liquor. Her attempt at getting Kobayashi to make love with her is unsuccessful however, as Kobayashi becomes drunk and ends up giving Tohru grief about her maid outfit. Shortly after this event, Kobayashi's gender soon returns to normal and she wonders what Ilulu will do next. 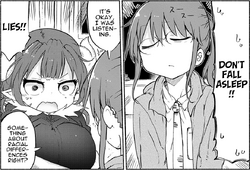 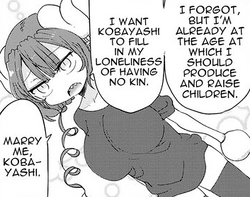 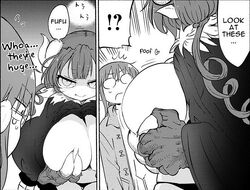 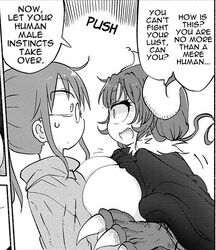 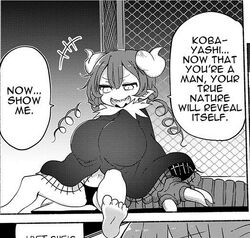 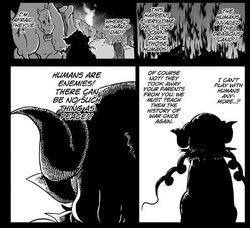 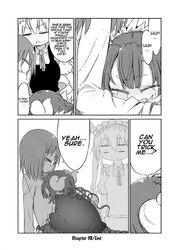 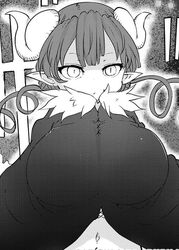 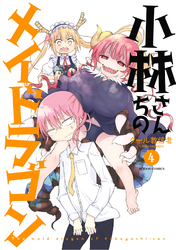