Royal executioner of the Seven Kingdoms

Skilled with the sword.

Ser Ilyn Payne is a character from A Song Of Ice And Fire / Game of Thrones. He serves as the King's Justice, or the royal executioner of the Seven Kingdoms.

He is played by Wilko Johnson.

He is a grim man, thin, with a beardless, pockmarked face. He has deep set of pale, colorless eyes and hollow cheeks. He is almost completely bald. He wears iron-grey chain mail over boiled leather with a large greatsword worn over his right shoulder.

It has been mentioned more than once in the story that Payne lives for nothing but killing.

Ser Ilyn had his tongue ripped out with hot pincers at the command of Aerys II Targaryen the Mad King. So, he can no longer speak. He served as King's Justice in the service of King Robert I Baratheon.

When Joffrey sentences Ned Stark to death, Ser Ilyn is the headsman and decapitates Ned with his own sword, Ice (later the sword is melted down and will become two longswords: Widow's Wail and Oathkeeper). Joffrey later has him cut out a man's tongue.

Ilyn Payne's unhesitating obedience in carrying out Joffrey's order to execute Eddard Stark is not without repercussions. When Tyrion Lannister arrives in the capital city, sent by his father Tywin to rein in Joffrey's erratic behavior, he confronts his sister Cersei over her defense that she "tried to stop" Eddard's execution. Tyrion bluntly points out Joffrey wasn't the one holding the sword, yet both Cersei and Ser Ilyn simply went along with the boy-king's orders, when they could have easily just stopped what they were doing.

Ser Ilyn continues to serve King Joffrey as the War of the Five Kings ravages Westeros. During the Battle of the Blackwater, Ser Ilyn accompanies Queen Cersei to Maegor's Holdfast. Though the Queen claims Ser Ilyn is present to protect them and to deal with potential betrayers, she later admits to Sansa that Ilyn's true purpose is to execute her and Sansa, and possibly the rest of the ladies who have taken refuge in the holdfast, should Stannis Baratheon take the city. 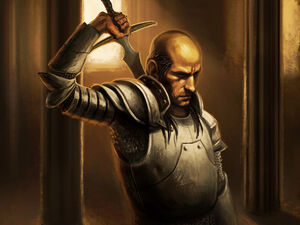 Ser Ilyn in his armor. 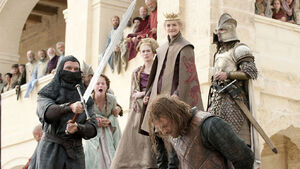