Pretending to be Michelle Lobster.

Be together with Lucy forever.

Imitatia (イミテイシア Imiteishia), whose real name is Michelle (ミッシェル, Missheru), is the secondary antagonist of the Key of the Starry Sky Arc in the manga/anime series Fairy Tail. She was a member of the Reborn Oración Seis and was dubbed the mistress of mimicry and deception. When first introduced, she claimed to be Michelle Lobster, a distant relative of Lucy Heartfilia and a member of the wealthy Lobster Family. She was, however, eventually revealed to be the animated form of a doll Lucy used to play with during her childhood.

She is voiced by Yukana Nogami in the Japanese version of the anime, and Tabitha Ray in the English dubbed version.

Imitatia has a slender figure and is of average height. She has a slight resemblance to Lucy Heartfilia (something which later aided in convincing Lucy of their true relationship), having wavy dark blonde hair and blue eyes complete with fair skin. Her attire as Michelle Lobster makes reference to upper-class women, consisting of a pink dress with a white trim and a dark pink ribbon attached to it in which the top portion of the dress is a slightly lighter pink while the area below her waist has a darker shade of pink. A pink bonnet with a white trim is on her head, including a blue corsage on the left side. She also wears white stockings and little dark pink shoes.

In relevance with her true form, Imitatia wears an outfit somewhat naturalistic in appearance. Her right eye is covered by a rose eye patch, which is seen glowing red when she is not wearing the patch. Imitatia wears a short, strapless shirt made entirely of dark green petals, and she wears long, dark green gloves that reach to the top of her arms. Imitatia sports a short wide skirt made of dark green petals that point sideways and she also wears pouch-like boots. Her left arm and both her legs are adorned by light green thorny vines.

In her true doll form, she wears a dress reminiscent of her Michelle form, although with a blueish coloration, along with blue shoes. She is also not seen wearing a hat during this form.

When disguised as Michelle Lobster, Imitatia portrays herself to be a dedicated and passionate person, having searched for Lucy for over seven years, in honor of Jude Heartfilia's wishes. She is often seen being cheerful, smiling sweetly when around others, also appearing inspired by Fairy Tail and how they tackle missions; she mentions that it seems like a fun place to be in. She also tends to be clumsy at times and easily becomes quite sensitive and fragile, often crying loudly whether from happiness or sadness. According to Lucy, there is something about "Michelle" that makes everyone want to protect her. "Michelle" has a sporadic appetite; she is often seen eating food when talking to others. Happy has also remarked that "Michelle" is similar to Lucy as they are both noisy. She shows a side of interest to Lucy, unafraid to watch a potentially dangerous mission right in front of her or take action immediately when she sees Lucy in danger.

After her true form was revealed, Imitatia holds a very cold, serious and mechanical personality towards her mission as a member of the Reborn Oración Seis. She orders Byro to complete his mission which was to bring Lucy Heartfilia back to her. She knocks out Lucy with the back of her sword, and spares Natsu's life when Klodoa wants to dispose of him. But even in her true form, she is still shown to have a soft side since she cries when Lucy is talking to her before revealing herself. In addition, in her true form Imitatia possesses an overprotective attitude towards Lucy, who she still calls "Nee-san" despite having actually betrayed her. In the end, she reveals that she did not want to hurt Lucy, but only spend time with her like the old times, attacking Midnight in a fury when he reveals to her that Lucy will be lost inside the Infinity Clock forever. She apologetically asks Lucy to forgive her in her last words before she is turned into a doll again. Lucy later brings Imitatia back to her apartment as a doll and keeps her there alongside her family portrait.

Imitatia was a doll and a birthday present from Lucy's mother, Layla Heartfilia. Lucy announced that her gift was to be her new little sister; thus, child and doll were always together and Lucy became more and more fond of the doll, to the point that she even designed outfits and garments for her "younger sister". However, when Layla passed on, Lucy abandoned the doll as it gave her painful memories of her mother. Later on, Lucy completely forgot about the doll and "Michelle" was given an apology from Jude Heartfilia due to the sudden rejection of its company. Imitatia was kept in the storage attic of the Heartfilia Konzern. Imitatia recalled that Midnight arrived at the Heartfilia mansion and collected her, promising her that she could stay by Lucy's side forever if she joined Oración Seis. She agreed, and was instructed by Midnight to transform herself into Michelle Lobster and search everywhere for Lucy Heartfilia. Eventually, Imitatia located Jude Heartfilia and provided her skills and knowledge to help and work for his new firm. Afterwards, Imitatia (still in the form of Michelle Lobster) was present at the time of Jude's death and it is revealed that he knew of her true identity. His dying wish was that he hoped she would continue as Lucy's little sister.

Transformation Magic: Imitatia has the ability to transform into a person and imitate any people, a prime example of this being Michelle Lobster.

Expert Swordsmanship Specialist: Imitatia has proven herself an incredibly powerful swordswoman by being agile and destructive in combat. She employs her swordsmanship with a style focused on attacking the weak points of an opponent's body, thus maximizing the damage and pain dealt to them.

High Pain Tolerance: According to Imitatia, her body feels no pain, which, according to her, makes it impossible for her to lose in a fight.

Flower Shield: Imitatia uses a flower shaped shield/blade with a mark of Oración Seis, whose petals are blades that can rotate at great speed. It can be used as both a means of defense and as a weapon, capable of being thrown and drawn back in thanks to the thorny vines that sprout from Imitatia's hand, quickly moving in different directions in a short period of time.

Rose Sword: From inside her Flower Shield, Imitatia can summon a sword with a rose motif, a spiked handguard and a large, wide blade.

Vine Armor: Imitatia wears a Magic Armor with features reminiscent of flower and vines, from which she is able to unleash vines that can be used to constrict the enemy. Her vines have sharp thorns which can inflict great damage to the opponent. 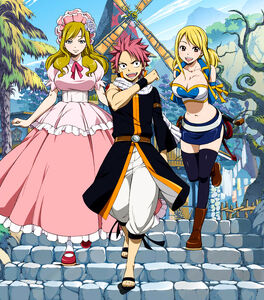 Michelle with Natsu and Lucy 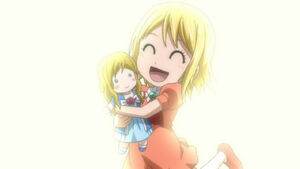 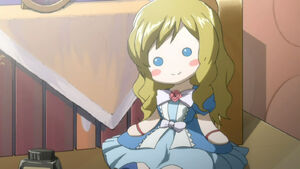 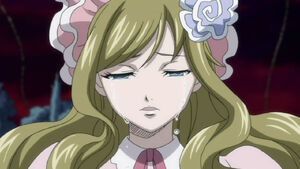 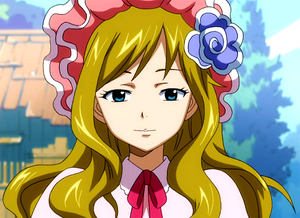 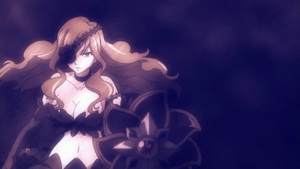 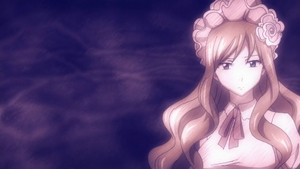